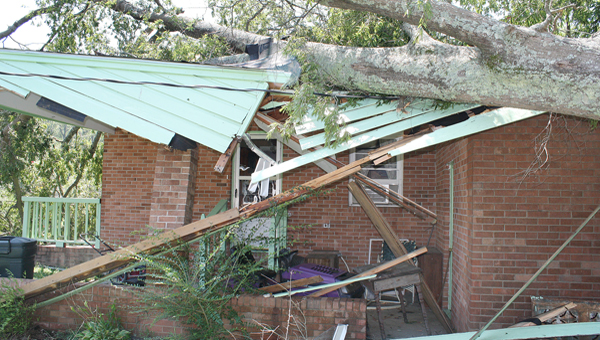 John and Diane Green escaped unharmed from their Cofield home damaged Saturday during the hurricane. Staff Photo by Cal Bryant

COFIELD – All John and Diane Green were trying to do was get some sleep during the storm.

Unfortunately for the Cofield couple, Hurricane Irene had other ideas.

“The wind was blowing really hard and we were on the other end of the house trying to rest when this happened,” John Green said, pointing towards an oak tree uprooted by the storm.

That tree wound up crashing down on the carport attached to the home, causing significant damage there and to the kitchen area of the single-story residence located on the Ahoskie-Cofield Road.

A vehicle parked just outside the carport was also damaged.

“I had to cut off some limbs just to back the car away from the carport,” Green said.

He said the home, built in 1968, belonged to his family. He and his wife have lived there since January of this year.

“I just live here and take care of the house,” Green said, adding the home is not insured. “We’ve got some major repairs to do.”

The couple managed to escape unharmed, exiting the house through the door leading to the carport. The tree punctured the roof of the carport, causing a large crack in the ceiling underneath. That crack extended inside the home in the kitchen area.

“It got pretty scary,” Green said of the incident, “but we got out okay.”

“We can fix the damage. We can’t fix ourselves if we’re hurt,” Mrs. Green said.

Hurricane Irene severely damaged crops throughout the Roanoke-Chowan area, including this field of tobacco on Hexlena Road in Bertie County.... read more