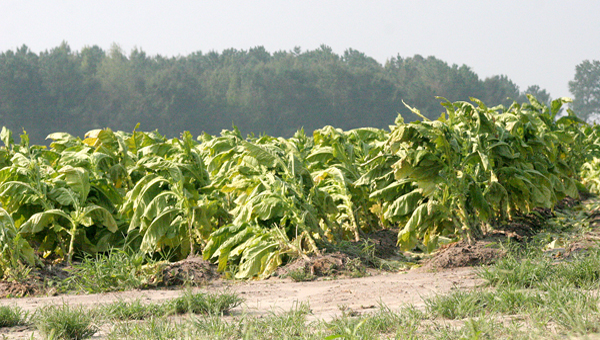 Hurricane Irene severely damaged crops throughout the Roanoke-Chowan area, including this field of tobacco on Hexlena Road in Bertie County. Staff Photo by Thadd White

WINDSOR – Clean up is going well in Bertie County, but the cost in crop damage from Hurricane Irene could be devastating.

Bertie County Manager Zee Lamb reported Monday that crop damage could exceed $17 million following the winds and rains of this past weekend.

Lamb said early estimates are that Bertie County suffered $16.85 million in losses to tobacco. The cost of losses in cotton is still uncertain, but there will apparently be a loss to the crop.

“It looks like tobacco in Bertie County is devastated,” Lamb said. “Eighty or 90 percent of the tobacco may be destroyed.”

In addition, Bertie County still has more than 5,000 people without electricity as they recover from the storm that ravaged the county Saturday and early Sunday.

In addition to the crop damage, Bertie County has an estimated $600,000 in structural damage and another $200,000-plus in damage to docks and bulkheads.

Thus far, Bertie County has nearly 40 structures that have been identified as damaged. Of that number, 32 are single-family homes, one is a business, one a government building, two mobile homes and one apartment.

Five of the structures received major damage, 32 have minor damage and one has been destroyed.

As the county assesses damages, it is also busy trying to aid those in need.

There are ice and water distribution sites throughout the county, located at most of the fire departments, except in Windsor.

Lamb said he hoped there would be further help from the state and federal agencies, but there has been no disaster declaration yet.

Despite the damages, Lamb said the county could have faced an even more difficult task of rebuilding again.

Bertie County is currently under no curfew, though it does remain under a State of Emergency.

AHOSKIE – She has been one of the leaders in returning Hertford County High School girls basketball to prominence. Now,... read more