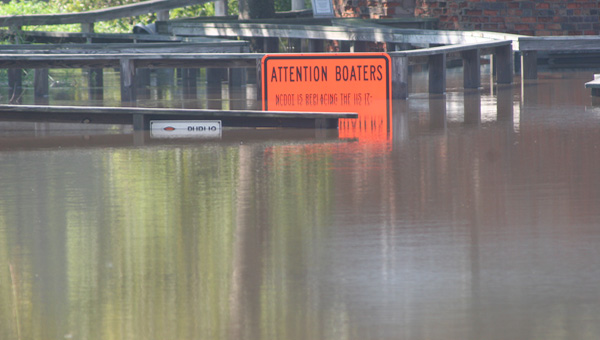 This scene from near the Roanoke-Cashie River Center shows the boardwalk under water as the Cashie River is overflowing its banks. Experts believe the river will crest at 12 noon Monday.

WINDSOR – Flooding is not a major issue in the town of Windsor at this point.

Windsor Town Commissioner Joe Alexander said around noon Sunday that only a few streets in town were experiencing flooding at this point.

The major artery of the town – King Street – is flooded from St. Elmo Street to within 20 feet of Granville Street, but businesses do not appear to have water in them.

Alexander did say Livermon Zoo and Park was under water, but stressed the animals had already been moved to another location. Windsor-Bertie County Chamber of Commerce Director Collins Cooper said while the park has been flooded, the Freeman Hotel was not affected at this time. The historic structure, which is home to the Chamber, has been vacant since it was flooded in September of last year by the remnants of Tropical Storm Nichole.

In addition to flooding on King Street, there are some places on Sutton Drive that have flooded, according to Alexander. No homes are believed to be affected on that street.

“The level at the bridge is approximately six inches below the surface,” he said. “Water is flowing freely under the bridge.”

The Cashie River is expected to crest at approximately 12 noon Monday.

As they deal with the water, Alexander said the town is also busy working on cleanup.

“Right now approximately 95 percent of our electric customers have power,” the commissioner said. “We are working to restore those we can right now. The ones in places like Sutton Drive will take more time because we have to let the flooding subside.”

No injuries have been reported.

Windsor – Windsor Mayor Jimmy Hoggard has announced a curfew for the town. The curfew will be in effect from... read more