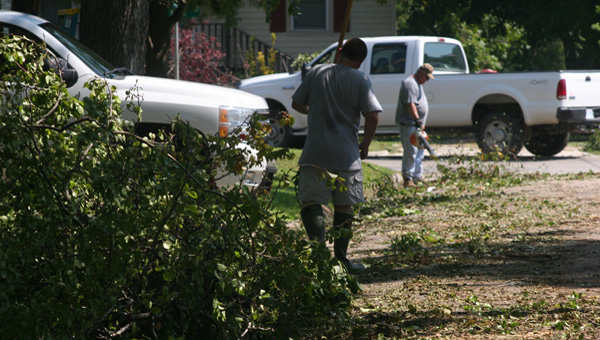 Residents on Byrd Street in Windsor begin the process of cleaning up Sunday. People all over Bertie County were out in their yards removing debris in the wake of Hurricane Irene. Staff Photo Thadd White

WINDSOR – The overwhelming sentiment in Bertie County is relief.

As residents began cleaning up from Hurricane Irene on Sunday, most were pleased to only have minor damage and limited flooding.

“Living in Bertie County, we’ve been through flooding, a hurricane, tornadoes and an earthquake in the last year,” one resident said as he cleaned branches from his front yard. “Looking at all of that, this is pretty minor.”

Residents all over Bertie County were busy in their yards Sunday cleaning up branches, limbs and other debris that had been left in the wake of the storm. Many homeowners were already piling debris in the roadways to have it picked up by crews.

One man in Windsor said he had been marking the progress of the water at the Cashie River with photos which he had taken throughout the course of the storm. He was back out Sunday morning documenting the current water level.

The man, who owns a home in Bertie County, but doesn’t reside there yet, said he experienced his first hurricane when Irene made its way through Eastern North Carolina this weekend.

“It was actually fun,” he said. “I’m looking forward to getting the house completed and moving up here.”

Another person walking the boardwalk in Windsor said he was amazed at the water level of the Cashie River, but thankful that it wasn’t worse.

“We’ve seen it worse,” he said. “I’m glad that it isn’t flooding like it did before.”

Other residents said they were busy working on their personal property in hopes of finishing up in time to get to their business before nightfall and see what needed to be done there.

In addition to homes and businesses, one of the coaches from Bertie High School was headed to the school to see how much damage was done there.

This scene from near the Roanoke-Cashie River Center shows the boardwalk under water as the Cashie River is overflowing its... read more