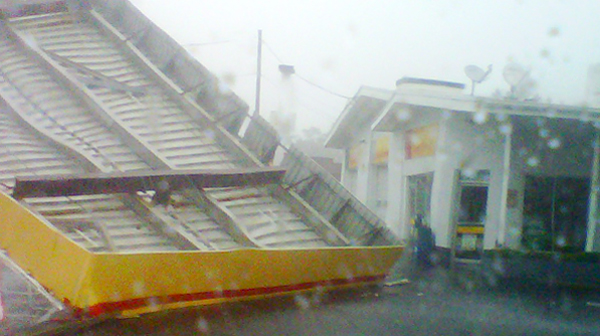 Saturday afternoon's high winds toppled the canopy at the Duck Thru in downtown Ahoskie at the corner of Main Street and Martin Luther King Jr. Blvd. Submitted Photo by Michael Barnes

Hurricane Irene has left a trail of destruction over coastal sections of North Carolina.

The center of the storm was exiting the coast near the state line as of 7:45 p.m. Saturday. Stiff winds were still blowing across the Roanoke-Chowan area, but had shifted to the northwest, then west, meaning the end of the worst conditions was near.

Reports are coming in from throughout the area of widespread power outages, downed trees – some toppling on top of structures – and flooded roads and private property. There were no reports of any injuries locally, although state officials are reporting three, storm-related deaths in the eastern part of the state (one each in Pitt, Nash and Onslow County).

With the Cashie River and Ahoskie Creek rising, travel in and near those bodies of water will be impacted over the next several days. Both will crest by Tuesday or early Wednesday.

Water was creeping closer to the Roanoke-Cashie River Center in Windsor as of late Saturday afternoon. There were also reports of impassable roads in Bertie County due to flooding, including Bull Hill Road and Hoggard Mill Road. Water was rising on US 13/17 between Windsor and Williamston.

For up to the minute information on road conditions anywhere in the state, visit the North Carolina Department of Transportation website (ncdot.org).

Electrical service may take days to restore, especially in isolated rural areas. Power crews from Dominion and Roanoke Electric are expected to begin tackling that mountain of a chore as soon as the winds subside.

Irene made landfall at 7:30 a.m. Saturday near Cape Lookout. Although it has significantly weakened from the Category 3 storm it was earlier in the week, it was packing winds of 90 mph with higher gusts at that time.

Locally, the Roanoke-Chowan area was pelted with winds of 50-to-70 mph with higher gusts. Most of the higher winds came later on Saturday as the eye of Irene tracked closer to the local area.

The storm did remain to the east of the local area. After making landfall, it headed north-northeast, tracking across the Pamlico and Albemarle sounds.

Sunday’s forecast calls for clearing skies and a high of 90 degrees. It will still be breezy with winds from the west at 20-to-25 mph.

When it’s safe, email your storm photos and stories to cal.bryant@r-cnews.com.

National Weather Service Doppler indicates that the eye of Irene made landfall near Cape Lookout around 7:30 a.m. The estimated... read more