HC citizens encouraged to ‘hunker down’

Hunker down and ride it out….that’s the advice of Hertford County Emergency Management Director Chris Smith to county citizens. 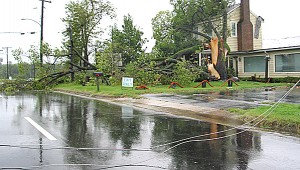 High winds toppled this tree in front of Catherine's Restaurant in Ahoskie and brought down power lines as well. Staff Photo by Cal Bryant

Contacted at 1 p.m. Saturday, Smith advised county residents to remain in their homes, unless conditions become unsafe inside those structures.

“Unless the storm gains a bit of forward speed, we’re not expecting it to leave our area until the early morning hours of Sunday,” Smith said.

Smith said he has many reports of downed trees and power lines. There is one report of a back porch of a home suffering major damage in the Como area. 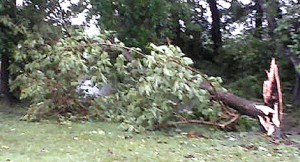 “Computer models are showing wind gusts here at 55 miles per hour, but the highest one I’ve seen here in Winton has been 39 miles per hour,” Smith said. “Looking at the current track of the storm, I really don’t see the winds getting much higher, there may be some stronger gusts.”

Bands of heavy rain are still impacting Hertford County, as well as Gates, Bertie and Northampton. Those rainfall bands are expected to continue throughout the afternoon and Saturday night. Rainfall amounts may reach as high as 12-to-15 inches.

“I would not recommend getting out on the roads until Sunday afternoon,” Smith noted. “DOT needs to get out and survey the damage on the roads, clearing them of trees and debris and checking on areas that are normally prone to flood.”

As of noon on Saturday, Smith said 108 individuals are using Hertford County High School in Ahoskie as a shelter from the storm.

“We expect to see a few more come in before nightfall,” Smith said.

Those using the shelter need to bring blankets, needed medical supplies and personal items, including food for at least three days.  Anyone with a special medical need must be accompanied by a caregiver at all times during their stay at the shelter.

There is countywide curfew (8 p.m. Saturday until 6 a.m. Sunday). The sale of wine, beer and liquor is prohibited and will resume at 1 p.m. on Sunday.

Upon the recommendation of Northampton County Sheriff Wardie Vincent, the State of Emergency declared in the county has been amended... read more