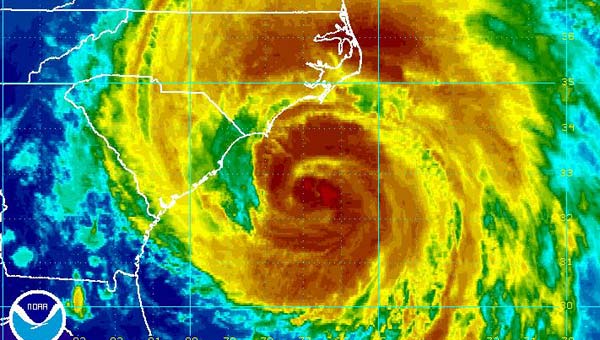 According to National Weather Service officials, high winds blowing water onshore will quickly move to inland waterways, including the Albemarle and Pamlico sounds as well as impacting the Chowan River.

Within the hurricane warning areas of North Carolina – which include Bertie, Gates and Hertford counties – the storm surge may be as much as 6 to 11 feet above ground level.

Heavy rain is another major impact of the hurricane. NWS officials are predicting rainfall accumulations of

6 to 10 inches, with isolated maximum amounts of 15 inches, from eastern North Carolina northward through the Mid-Atlantic states and into the New England states through Monday. These heavy bands of rain could cause widespread flooding and life-threatening flash floods.

The 11 a.m. advisory from the National Hurricane Center has Irene moving north at 14 mph. The center of the storm, with winds of 105 mph, is 330 miles south-southwest of Cape Hatteras.

Landfall is expected Saturday morning over the Core Banks area of Carteret County near Morehead City.