We’re not completely “out of the woods” just yet.

Although Hurricane Irene now seems to be taking more of a northeasterly track once she arrives along the North Carolina coast this weekend, the exact path of this strong storm remains uncertain.

As of 8 a.m. Wednesday, the eye of Hurricane Irene was located near latitude 21.9 north, longitude 73.3 west. Irene is moving toward the west-northwest near 9 mph, though a gradual turn toward the northwest is expected later in the day, according to information on the National Weather Service website (www.nws.noaa.gov). 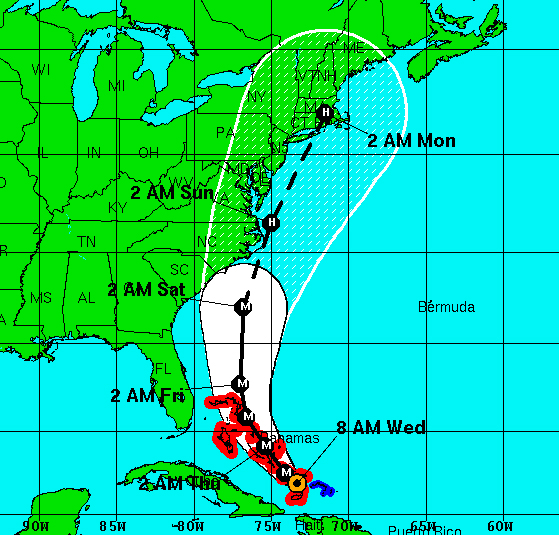 Irene is forecast to move across the southeastern and central Bahamas on Wednesday and over the northwestern Bahamas on Thursday.

Data from an Air Force reserve hurricane hunter aircraft indicates that the maximum sustained winds have increased to near 115 mph, with higher gusts. Irene is a Category 3 hurricane on the Saffir-Simpson hurricane wind scale. Some additional strengthening is forecast during the day.

The current forecast track brings the center of a somewhat-weakened Irene just off the Va./N.C. coast on Sunday morning and over New England by Monday morning, although it is important not to focus on the exact forecast track, especially several days out, said NWS officials.

With that track just off the coast, the Roanoke-Chowan area could experience tropical storm force winds in the 40-to-50 mph range. However, those winds could increase, possibly to hurricane strength (74 mph or greater) should the eye of the storm pass closer to the coastline.

“We’re hoping the hurricane will make a major move towards the east and out over the ocean,” Hampton said. “But we can’t sit back and wait and hope it will turn; we’re making plans now and making sure everything on our end is ready.”

“We’re keeping a eye on the storm’s track. We are ready when we get the call,” she stressed.

“Irene will probably effect us sometime late Saturday into Sunday morning,” said Billy Winn, Director of Gates County Emergency Management. “Initial indications are for increased development and a really close approach to us. The models have shown today that there may be some easterly shift which would be great for us.”

Winn continued, “However, this is the time to plan, get your family and home in order; remain alert, prepare for the worst and hope for the best. We have a great team of responders ready to assist, but remember to spread the preparedness word that the first 72 hours are on you (the public).”

Area citizens are urged to closely monitor the storm’s path over the next few days and be prepared to take emergency measures. Radio, TV and the R-C News-Herald website (www.r-cnews.com) provide timely updates on Hurricane Irene.