Telephone calls from startled local residents poured into the R-C News-Herald newsroom moments after the ground stopped shaking. All told stories of their harrowing adventure that lasted approximately 15 seconds. 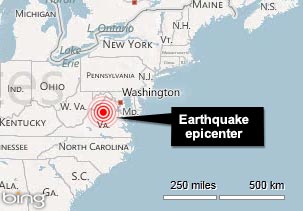 The cause was an earthquake, measuring 5.8 on the Richter scale, that occurred at 1:51 p.m. Tuesday near Mineral, VA, approximately 40 miles northwest of Richmond, VA. The quake was felt in 25 states, including as far away as Ohio and Georgia, as well as southern Canada. It resulted in the evacuation of most all buildings in Washington, DC. The Washington Monument is closed to the public after a crack was discovered near the top of the historical sphere.

“We thought a helicopter was flying real low overhead; the house rumbled,” said Vicki from Mapleton Road near Murfreesboro. “I talked to a relative up in Boston and they felt it up there, too.”

“It was very scary; our office was shaking all over,” said Deborah from Rich Square.

“Our house shook so hard that I thought the pictures were going to fall off the wall,” said Richard of the Brantley’s Grove community near Ahoskie.

“It shook hard here; was it an earthquake,” asked Ann from Eure.

Doris of Woodland was sitting in her chair when….“everything started shaking.”

Jennafer from Northampton County reported the ground shook so hard that ripples were still seen in the family’s pool for a few minutes afterwards.

“I was on the phone with someone in Salisbury, Maryland and it was shaking there at the same time,” said Annette in Windsor.

“I was sitting at my desk and felt everything begin to move,” stated Sarah of Aulander.  “As I was starting to check outside to see if I can find something that had caused it, one of the library patrons spoke to me and asked if I had just felt movement.  I called Town Hall, suggested I might be crazy, but before I could even tell the clerk why I was calling she asked if my desk had just moved.  She said the folks from the post office had also called over and said the same thing happened there.”

Bobby in Ahoskie said the overhead light fixtures in his building started swaying back and forth.

According to Dr. Alton Dooley, associate curator of paleontology at the Virginia Museum of Natural History, this was one of the largest earthquakes in Virginia’s recorded history, although seismic events in the area are not uncommon.

Dr. Dooley said the epicenter of this earthquake occurred in the Central Virginia Seismic Zone, an area active in seismic activity.

“The Central Virginia Seismic Zone is located throughout Virginia’s Piedmont region,“ Dooley said.  “Most of the faults were originally formed either during continental collisions that formed the Appalachian Mountains around 300 million years ago, or during the rifting that formed the Atlantic Ocean starting around 220 million years ago. While those events are in the distant past, the faults formed during those events are still present and rocks still occasionally move along those faults, causing earthquakes.”

“This earthquake was more than 10 times stronger than the 2003 earthquake that was felt by many residents of Martinsville, Virginia,” Dooley said.  “But even though this was a large earthquake for Virginia, it was small compared to earthquakes that occur in more seismically active zones. For example, the recent earthquake of the coast of Japan that caused extensive damage and a tsunami was more than 1000 times more powerful than today’s earthquake.”