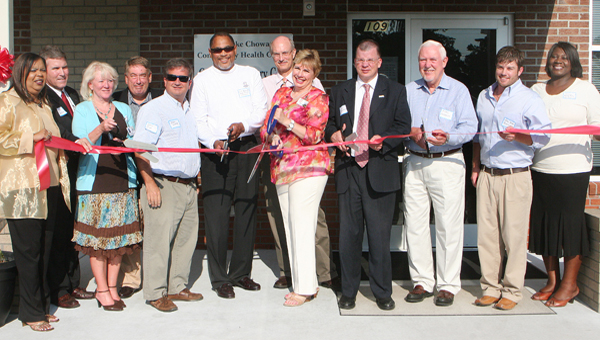 COLERAIN – Big things can happen in a small town.

Officials with the Roanoke Chowan Community Health Center, Bertie County and the town of Colerain gathered to celebrate the grand opening of Colerain Primary Care and the Bertie County Council on Aging Nutrition Site.

Ground was broken on the facility in June of last year and Tuesday the group celebrated together the opening of a state-of-the-art facility.

Kim Schwartz, President and CEO of Roanoke Chowan Community Health Center, welcomed a standing room only crowd inside the facility for the dedication.

On hand to help celebrate the project was Dan Gerlach, who serves as President of the Golden Leaf Foundation. Golden Leaf provided $280,000 in funding for the new building.

“Health care and access to health care is one of our priorities,” Gerlach said. “We want to thank the community and those who participated in the process when we came to Bertie County.”

Gerlach said it was a priority of Golden Leaf to provide aid to Tier 1 counties.

“My staff and I spent a lot of time in Bertie County, which is a place of dedicated and hard working people,” he said.

Bertie County Manager Zee Lamb said he was thankful to all the partners who worked together in making the project reach fruition. He thanked Gerlach and Golden Leaf as well as the Bertie County Commissioners and the citizens who worked with Golden Leaf on the community project.

“At first, this facility didn’t have the points to qualify with Golden Leaf, but Kim, Commissioner Wallace Perry, Commissioner L.C. Hoggard and others worked together to make it happen,” Lamb said.  “I’m thrilled to be here today.”

Colerain Mayor Bernie Baker said his community was pleased to have such a fine facility.

“We are certainly proud and fortunate to have this facility,” he said.

Baker said he was pleased with all the hard work that went into making the project happen and with bringing it to Colerain.

Schwartz said she was appreciative of the comments giving her credit, but shared the recognition with Bonnie Britton, who she said was a loud voice in making it happen.

“This is a promise kept,” she said.

Schwartz said when Colerain Primary Care opened; it had two exam rooms and one provider. The new facility will have four providers.

The facility also will provide two firsts for North Carolina; a Community Health Center and Nutrition site for seniors on one campus and the first telepharmacy in the state.

The Rev. Laura Early provide words of dedication for the building and then those in attendance had the opportunity to take a tour.

Joyce and John Jackson jointly admire a print of the historic Northampton County Courthouse as presented to the Ohio couple... read more