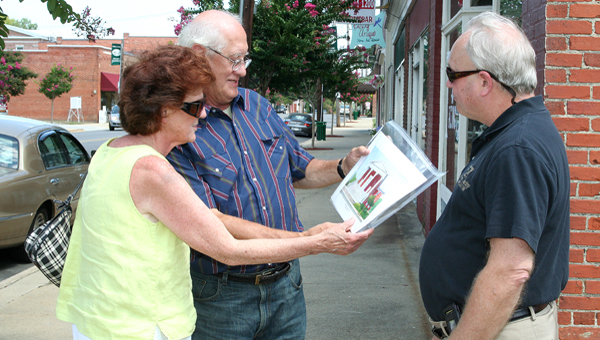 JACKSON — More than 20 years ago, Joyce and John Jackson of Delaware, Ohio set out to leave a legacy by planting trees across the nation.

The county seat of Northampton happens to be a part of that legacy. In 1995, the couple planted five knee-high crepe myrtle trees near the Northampton County Memorial Library.

Sixteen years later it all came full circle as the Jacksons returned on Tuesday to the very spot where the trees now tower over those who pass below them. Four of the five trees remain around the library. Jackson Mayor Jim Gossip said one was removed for the recent library renovation.

“That’s the main reason you plant something is you want to see it prosper,” said Mr. Jackson. “To see them look so good is very satisfying.”

During the 1990’s, the couple traveled 64,000 miles around the United States planting trees (indigenous to the specific areas) in towns bearing the family surname. Their 10-year journey took them to planting sites related to the name of Jackson in Maine, New Jersey and Rhode Island; to Jacksonville in Maryland, New Hampshire, New York and Vermont; and to Jackson County in West Virginia and Idaho.

At the end of their travels they had planted five trees in each of the nation’s 50 states, from Hawaii to Maine.

This summer the Jacksons have returned to 12 of the planting sites in the eastern portion of the country to check up on the trees and promote their book “Trail of Trees”, which chronicles their odyssey. It contains 261 pages of stories and history, nearly 100 photographs and a chapter dedicated to each state and other special planting locations. The chapter featuring Jackson, North Carolina is aptly titled: “Southern Hospitality.”

The book is currently for sale at the Northampton County Museum in Jackson for $20 each.

Gossip was one of the many residents to greet the Jacksons in 1995 and on Tuesday he along with his wife, Judy, were there for the couple’s return. Gossip presented the Jacksons with a print of the historic Northampton County Courthouse that sits in the middle of downtown.

When the couple first contacted Jackson officials about their plans to plant the crape myrtles they were willing to accommodate them. Gossip said the information was turned over to the Revitalization Committee, which has always been active in the town.

“We really embraced the concept because we thought it was just an extraordinary idea on two levels; one it was very appropriate at the time for us because we were working on the revitalization and beautification of the town and we would have plant material at no charge,” Gossip said. “The second level we just thought it was quintessential small town USA, the legacy of planting these trees in all 50 states.”

Mrs. Jackson said the concept for planting the trees began when she was diagnosed with breast cancer.

“Your mortality is challenged and you’re sitting there thinking, shoot, I better start thinking about leaving a legacy,” she said. “We had always planted trees during our lifetime and I thought, maybe that’s the answer.”

“Trees are an example of some kind of legacy, something that survives our lifetime, something that we can show our kids and grandkids,” said Mr. Jackson. “Trees tend to resonate with people too.”

The Jacksons, originally from Philadelphia, Penn. took the first step in their travels by figuring out just how many places named Jackson were located throughout the country. Without a computer, the couple turned to local libraries in finding their answer. There were approximately 40.

“The other 10 we had to be creative and we came up with (the idea of using) our first names (as well as the names of our children),” she said.

Those first names resulted in visits to places such as St. John, Ariz., Robertsville, Conn., Christina, Del. and Stevens Village, Alaska. The couple also planted trees at The Hermitage near Nashville, Tenn., the birthplace of President Andrew Jackson.

The Jacksons are filled with stories about their travels and said they have found kindness in each of the communities they have visited.

“The one thing we found is that everybody in all 50 states loves where they live,” said Mrs. Jackson. “In every town that we went they all loved their town, they’re proud of their town.”

For more information about “Trail of Trees” and the Jackson’s journey visit www.thejacksonlegacy.com. The Northampton County Museum can be contacted at 534-2911 and the book can also be purchased from www.amazon.com.

The morning after our first team practice was an interesting experience. Not only were we all exhausted, but our muscles... read more