The last first day of pre-season has finally arrived for us seniors.

Tara Thomalla and I are the seniors and with us both being captains this year we have high expectations for the team.  Our team is finally ready to work  harder this year than before in order to keep our title of CIAA champions and compete in the NCAA regional tournament. 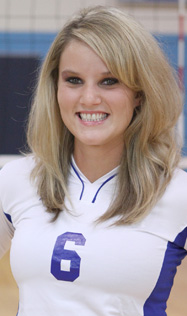 Our first practice day consisted of a team meeting at 2 p.m. where we discussed our goals for this season. Once 3 p.m. rolled around we were on the court ready for anything Coach (Peter) Green had prepared for us.

The returners began by introducing the newcomers our warm up and stretch routine and once we finished warming up we all were ready for our block practice which consisted of two groups that had the ability to focus more on their individual positions. For example, all of the passers were in a group together from 3-5 running through drills that helped strengthen our passing such as serve receive rotations where one person is serving at three passers and the passers objective is to pass five perfect passes in order to rotate.

Once we have accomplished that drill we moved on to the gauntlet drill which involved Coach hitting balls at us in our positions. We were expected to pass these perfectly, however there were a lot of times where we didn’t.

While some of us were concentrating on our passing, the other group consisted of the hitters who focused prominently on blocking and connecting with the setters. Having new hitters and a new setter on our team was a challenge because it is going to take time for those to connect well in order for an effective hit to exist. After the tedious two hours of constant passing, setting, and hitting we had a break to go eat dinner and rest for an hour or two.

Our break was inevitably over and we were back on the court this time as one team. Coach devised drills for us that worked every aspect of volleyball. In other words, he combined the use of passing, setting, and hitting all in one.

One of those drills involved only using the back row and a setter. Three people were lined up for serve receive and once the other side served the ball the receiving side would pass it to the setter either Callie Armistead or Allie Smith and they would set it back row to whomever. The goal for this drill was to focus on back row passing and attacking while competing for the win, since we kept score for both sides. The side that lost had incentives of running five suicides.

The rest of practice consisted of more competition drills that focused on perfecting our passing, setting, or hitting. After two long hours of intense practice we were over with day one of preseason. Once we prayed and cheered coach let us leave to rest before Tuesday’s day of practice.

Exhausted by this point all of us wanted to go to sleep, however the captains, myself, Karina Monroe, and Tara decided that team bonding was needed. So, we all showered and came over to my house and did activities to get to know everyone.

One activity we did involved each person choosing an item that most represented them self or an item that meant a lot to them and each person would place their chosen item in a numbered bag. One by one the items in the bags were released and we all had to write down the name of the person to the item we thought was theirs. We all discovered things about each other that we didn’t know before and this activity helped make us closer as a team because we all had the chance to get to know each other.

Activities such as these are imperative because by accepting each other and growing closer as a team will have a positive impact on our performance on the court. After Monday, we all knew that this year is our year.