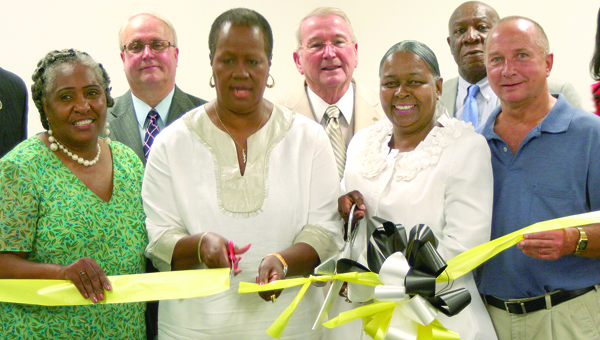 Local and state officials gathered Thursday to dedicate the new addition and renovations at the Northampton Memorial Library. The project, wholly funded by grant money, added 2,596 square feet to the facility as well as energy efficient features. Two vertical hybrid (solar and wind) turbines, installed by Blue Sun Renewable Energy, will power the building as well as the LED parking lot lights. Solar panels on the roof of the facility will also power a hot water tank for the bathrooms.

The library is the first retrofitted building with the “green” features in the Southeastern United States. It was built by A.R. Chesson of Williamston.

A new computer room, complete with 18 new computers and accessories, a kitchenette and a multipurpose room are some of the new spaces in the library’s addition. Eighteen new parking spaces were also added.

“We were blessed to see this project take root a few months ago and today we are reaping the harvest,” said Shirley Fields, chairperson of the library’s board of trustees.

Fields served as mistress of ceremonies for the event, which boasted an array of speakers, including State Rep. Michael H. Wray, Randall Gore, state director of U.S. Department of Agriculture Rural Development Rural Development and representatives from the offices of Gov. Bev Perdue and Congressman G.K. Butterfield.

Jackson Mayor Jim Gossip, referred to the library as “The People’s University” and noted the importance of having the library in the county.

“To have a state-of-the-art facility right here, in a rural Tier One Northeastern North Carolina county, is extraordinary,” he said. “It’s just a tremendous resource, not only to advance learning, but also it’s an important piece in the economic development makeup of the county.”

Northampton County Commission Vice Chairman James Hester recognized the Golden LEAF Foundation for their $433,902 share of the grant money that made the project possible.

He said the library was a tool for all people and all generations.

“Before us today we see stacks and stacks of books and computers that can open an entire world to us,” he said. “There’s stacks of books and resources for all of our folks, every age group. We are able to offer to every child and adult resources in which they can connect to the Internet or they can just come in a pick up a book and go down the road of a great adventure.”

He said the library is the most important place in the county, next to the churches, and encouraged citizens to take full advantage of it.

“How it’s used is left up to each individual that comes through these doors,” Hester concluded. “I’m proud to be a citizen of Northampton County where we realize our citizens are the most valuable asset we have.”

Commission Chairwoman Fannie Greene gave her welcome to the crowd, saying it was “another momentous day” in Northampton.

“I love being able to say that because we are growing in Northampton County,” she said.

“We are forever grateful to the Golden LEAF Foundation and to USDA for these funds, a total of $533,902 in grant funds. We are so appreciative,” she said.

Addie Randall, of Blue Sun Renewable Energy, said the library’s new “green” features will be a learning tool for and inspire those who visit. She said Blue Sun Renewable became involved with the project because of the vision of the project’s architect, Surapon Sujjavanich, who began designing the building with smart energy techniques to reduce energy consumption.

Rep. Wray said it was a great day for the county and the library project would not have been possible without people working together.

Wray spoke about the dedication of the library staff and board of trustees who worked diligently to secure Golden LEAF funding. He also referred to the USDA Rural Development funding that played a part.

“It takes everybody from the top to the bottom and nobody is any less in between,” he said.

USDA’s Gore recognized his staff in attendance for their work and noted USDA’s commitment to what is needed in the area.

“We plan to identify whatever the needs are in Eastern North Carolina,” he said.

Gore said Northampton was indeed awarded a little over $500,000 in grant money, but it was because the county is a Tier One county.

“You don’t welcome that (Tier One) position and I know that, but I assure you that this agency will be there for you to ensure that going forward if you have a need we’ll try to address that need,” he said.

Later in the day, Perdue visited the library for a “town hall” meeting and took a brief tour of the facility.

“I understand the library had a dedication today, and it’s fabulous. I just ran into the computer room to talk to every single person in there,” she said. “To have that kind of (grant) opportunity in Northampton County is very, very important.”

CREEKSVILLE – If you blink, you may miss it. That’s how quickly the Northampton County High School – East offense... read more