The lady he had seen on television many times was coming to the library for a visit…and just like that he was shaking hands with Gov. Bev Perdue. 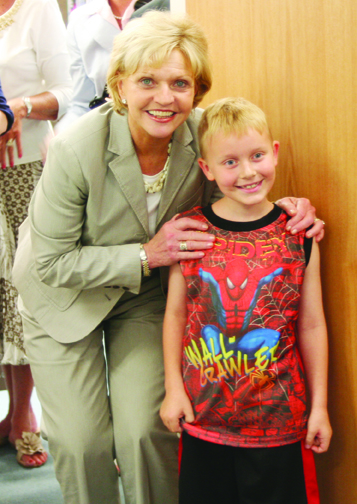 King patiently waited for a glimpse of Perdue at the door of the library’s multipurpose room with his grandparents, Malcolm and Anne Best, also of Rich Square.

Perdue made her way to the newly renovated library for a roundtable discussion on issues facing the state on Thursday after making an announcement regarding Enviva’s plans to construct a wood pellet mill near Interstate 95.

It had been a typical trip to the library for King and his grandparents to use to computer lab until they learned Perdue was coming for a visit.

The Bests asked Mira Jones, regional director of the governor’s Northeast regional office, about the possibility of their grandson meeting the governor. Jones obliged and arranged for the youngster to meet Perdue.

“Joshua, you made my day,” Perdue said, acknowledging the seven-year-old before a roundtable discussion.

Mrs. Best said they were in the computer room when they found out the governor was coming for a visit and decided to wait.

“It’s a blessing of the day I never thought I would meet her,” she said.

Best was also pleased with her grandson meeting Perdue.

“I can hardly wait for him to tell his parents about it. They’ll be so excited,” Best said. “Everyday he has been writing in a journal. This is going to be a wonderful journal page.”

Signup is under way for the Roanoke-Chowan Soccer Association fall season. Those wishing to participate can get forms from www.roanokechowansoccer.com... read more