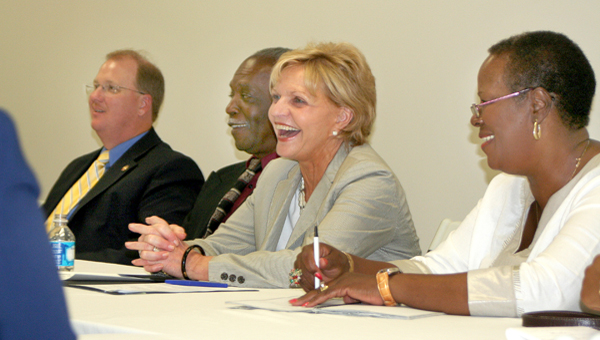 JACKSON — During her time in Northampton County on Thursday, Governor Bev Perdue held a “town hall” meeting about the current issues in North Carolina.

Perdue sat down with approximately 25 local officials and citizens at the newly renovated Northampton County Memorial Library to talk about various topics the state is facing, including unemployment and education. She also answered questions from those in attendance.

The governor wrapped up her time in Northampton at the library after visiting Garysburg Town Hall were it was announced Enviva will be placing a wood pellet manufacturing facility in Northampton, bringing with it 62 jobs. (See story, Page 1A)

Before the roundtable discussion, Perdue took the time to visit with those in the library’s revamped computer lab. The library was recently renovated with an addition and green energy features and a dedication ceremony was held Thursday morning (see the story in Tuesday’s edition of the Roanoke-Chowan News-Herald).

Perdue began her discussion by speaking about the economy and the need for jobs.

“Our unemployment rate in North Carolina is exceptionally high,” she said.

She noted the state went into the recession with a five and a half percent unemployment rate already due to businesses moving overseas between 2000 and 2003.

“So we were still trying to come back from that and then we have this massive recession, where we’ve loss more than 200,000 jobs,” she said.

Perdue noted how she cut spending through consolidating and privatizing services, eliminating positions and furloughing state employees and teachers in 2009.

“I had to do that because in April of 2009 we had a billion dollars worth of bills due for the state and the state’s checking account had $226 million—and I had to pay the bill,” she said.

Perdue noted how important state’s triple A bond rating is for local governments and school systems in order to get financing.

“This state is on everybody’s list of best places in the country that has created jobs,” she said. “Even though we’ve got a high unemployment rate, we have figured out a platform on which we can create jobs.”

Even though Perdue said she is proud of all the hard work and where the state is, she is also concerned with the direction North Carolina is taking.

She referred to the importance of education for the state’s workforce, even for those who will be hired at the future Enviva mill.

“We appear to have some leaders in Raleigh who do not understand the linkage between jobs and education,” she said. “Without a community college here, in this part of the state, there would be not much opportunity for any company to come in or for an existing company.”

Perdue noted the state historically was filled with low wage manufacturing, textile and farming jobs. She said it is because of education that the family farms have transformed themselves into sophisticated businesses and ordinary jobs have become high tech.

She added part of North Carolina’s success is because of the investment in public schools and access to the university system.

“Some of us do understand that early academic pre-school education is critically important for children who can’t afford private educational system opportunity,” she said.

Perdue said it was up to the voters to make sure their leaders were on board with education.

Perdue opened the floor for questions and comments.

Anthony Clark, Chair of the Northampton County Chapter of the Democratic Party, questioned Perdue about access to capital for small businesses.

“I think that’s a major focus for job creation,” he said. “We did some research and we found RBC provided $53,000 in 2009 for small business development in Northampton County.”

He noted RBC may merge with PNC, which he said he believed would create more opportunity.

Perdue noted the state has a Capital Access Fund and every bank and credit union has access to the money.

“The money is there for a family farm, a small business, you’ve got to have a business plan and you’ve got to be legitimate,” she said.

She added the bank will help walk those who apply through the loan process. Perdue said the maximum loan, she believed, was around $500,000.

“That really has helped a lot of small businesses,” she said. “There is good money available.”

Roanoke Electric Cooperative CEO Curtis Wynn spoke to the governor about an initiative through REC that is meant to respond to the outsourcing of American jobs overseas.

“We’ve been working and we’re very close to setting up a transaction call center,” Wynn said. “We have a vacant building in Rich Square that has facilities, high tech infrastructure—we’re trying real hard to bring jobs into that facility.”

Wynn said one of the areas the company is focusing on is a reverse auction in terms of procurement.

Perdue said she was familiar with the procurement process, which opens up the bid process on contracts to a variety of businesses and individuals via the Internet.

“It allows real people to bid for it,” she said.

Wynn noted there had been communication with the state on possibly doing some of that procurement work for North Carolina. He said REC is technically “shovel ready” on that project because the vacant building is retrofitted.

“We’re asking for your support on that because it’s something that’s perfectly aligned,” he said.

Perdue was receptive to the idea and asked Wynn to get that proposal to Rep. Wray.

“Obviously, I can’t promise that you will get the contract; that would be against the law,” she said. “I’ll see you get a shot. I want a call center somewhere in North Carolina, we need those jobs in rural communities.”

Perdue said Bolton was “talking her language,” but the General Assembly had done away with funding for mentoring programs within schools.

“So, there is no beginning teacher here in North Carolina that is going to have a seasoned teacher paired with them for the first year,” she said.

“My concern is with the cuts education has taken, how are we expected to recruit and retain quality educators in the classroom,” she said. “I think the difference between our performance and some of the urban school districts are the level of resources, how can we be expected to compete when we are not receiving what they get?”

Perdue said she tried to keep the sales tax that would go towards education.

“It would have been $16 (more) a year (in sales tax) for a North Carolina family,” she said. “And anybody would pay $16 for their child to have a shot at a new economy job.”

Perdue said all she could do is hit the road and that is what she was doing all over the state to meet with businesses, leaders and citizens.

RICH SQUARE – A man accused of murder held police at a standoff for nearly 40 minutes here Saturday before... read more