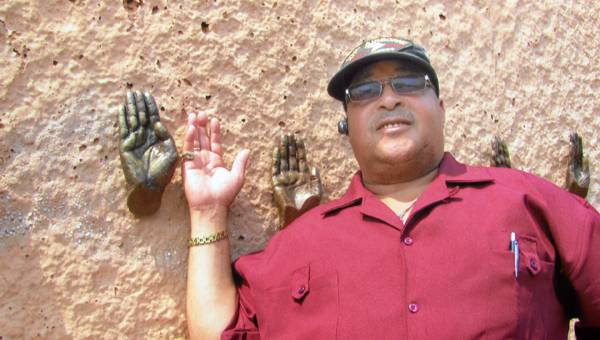 Northampton County native Stephen Jackson stands next to a bronze casting of his right hand, now on display at the North Carolina Veterans Park in Fayetteville. Contributed Photo

JACKSON — There’s no doubt Stephen D. Jackson is a patriot through and through.

Decades after he returned from military service in Vietnam, Jackson still strives to help his community and, perhaps more importantly, his fellow veterans through various organizations.

In the midst of his day to day altruistic acts, it was this July 4th that Jackson himself took the spotlight along side 99 other veterans.

On that day, Jackson was one of the thousands that made their way to Fayetteville to see the dedication of the North Carolina Veterans Park, which features the bronze hand castings of 100 veterans—one from each county in the state. There, the replica of Jackson’s hand stands as a testament of the sacrifice and dedication those war veterans in Northampton County have given to their country.

“It was a great experience, a great honor,” said Jackson about his time at the park. “It made me feel proud that I was actually picked for this.”

At the dedication, Jackson, along with his family (some came as far as Michigan) and friends, brushed elbows with the likes of Governor Beverley Perdue and Senator Kay Hagan, who were on hand for the ceremonies.

It’s a long way for Jackson, a native of Northampton who joined the Army in 1969, one year after he graduated from Gumberry High School. An Army Sergeant, he was an airborne foot solider in Vietnam.

“It was a real tough experience,” he said.

Despite placing his life on the line for his country, Jackson was one of the many Vietnam veterans met with protests when he returned home.

“When I got back to Oakland (Calif.), there were protesters throwing stones,” he said.

After that tour in Vietnam, along with many awards and citations, including the Army Commendation Medal, the Combat Infantryman’s Badge and the Bronze Star, he left the Army in 1972 to raise a family.

But the military and his fellow veterans were never far from his mind.

“The military is always a part of me,” he said.

In the present day, Jackson serves a number of organizations, including the Veterans of Foreign War (VFW) Post 4312 Seaboard, the Northampton County Branch of the NAACP, the Northampton Memorial Library Board of Trustees and the North Carolina Military Commission.

In the years since Vietnam, Jackson said he is pleased with how far veterans’ affairs as well as public support of those in the military have come.

“Now I can see on a national level we’re trying to do more for veterans coming back with mental health and other issues,” he said. “People in general are starting to recognize veterans and say thank you for their service.”

He added the advocacy is still needed for veterans, especially with mental health, and Veterans Service officials need to take more initiative on educating and informing veterans of the benefits and help available for the taking.

As for the NC Veterans Park, Jackson said he intends to return to Fayetteville to really explore the area with out thousands of visitors around.

“I’m planning to go back and take a tour of the memorial,” he said. “I’m going to take some time to reflect.”

Jackson asked military veterans who need assistance with benefits to give him a call at (252) 203-2169.