CHARLOTTE – Allison Diane Strickland and Jonathan Paul Walton were married on Saturday, June 11, 2011 at 6:30 p.m. at the Mint Museum Uptown in Charlotte, NC.

Jon is the son of Robert and Sol Walton of Orlando, Florida. He is the grandson of Ludy Nodalo, and the late Mr. & Mrs. Jim Walton of Orange City, Florida.

Matt Botts, and Terry Ziemke, friends and college roommates of the groom.

Wedding music, “Somewhere over the Rainbow,” ” Crazy Love” and “You’re the One” was provided by soloist,

Following the wedding and reception the couple left for their honeymoon in Punta Cana, Dominican Republic. The couple will make their home in Charlotte.

An engagement dinner party was hosted in October by Johnnie and Jen Grosso at their home.

A Kitchen Shower/Brunch was hosted by Whitney Turner, Ally Shope, Corey Sharpe and Melissa Benedict in Charlotte on May 7.

A Cookout/Shower was held in Rich Square on May 14. It was hosted by Charles Strickland and Kathy Whitley, Bill and Debbie Warmack, Eugene and Opal Brown, Winston and Gayle Hollingsworth, Gary and Pat Fields, Cliff Murphy and Joy Ferguson, Tony and Angel Terry, Jim and Casey Liverman, and Billy and Angie Lassiter.

A Bachelor’s weekend was held in Las Vegas over the first weekend in May.

A Bachelorette’s weekend was hosted by Ashleigh Strickland, sister of the bride, in Charleston, SC, May 28-31.

An after rehearsal dinner/party was held at Jack Beagle’s Pub in Charlotte. It was hosted by the parents of the groom, Bob and Sol Walton.

A Bridesmaid’s Brunch was held on Saturday, June 11, at the home of the bride. Rosie Jernigan of Elm Grove and Jennifer Bolton of Wilmington, aunts of the bride, were the hostesses. 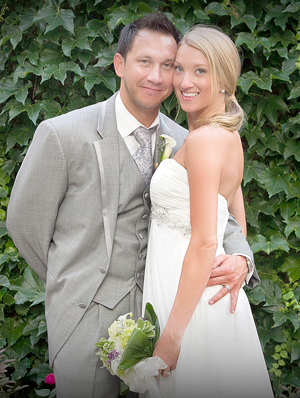