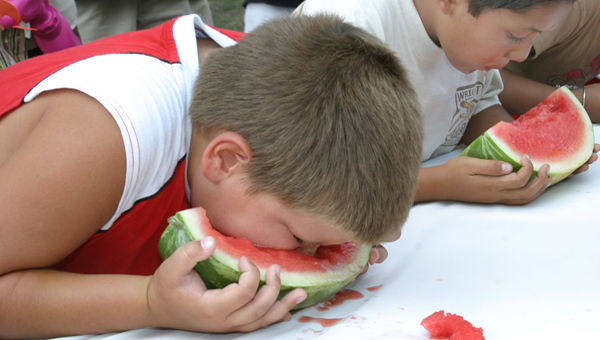 The annual Watermelon Eating Contest attracts a large field of contestants as they all attempt to claim the title at the North Carolina Watermelon Festival in Murfreesboro. The 2011 event begins Wednesday, July 27, and runs through Saturday, July 30. File Photo by Cal Bryant

MURFREESBORO – What started over a quarter-century ago as a four-hour affair has blossomed into one of eastern North Carolina’s biggest events.

The North Carolina Watermelon Festival begins its 26th annual run in Murfreesboro tomorrow (Wednesday); not as a four-hour event, but one that spans four days.

“The transformation this festival has seen over the years is amazing,” said event co-chairperson Kay Thomas. “We have grown from four hours to four days and feature a wider range of activities. But what hasn’t changed over the years is the family-oriented atmosphere one will find in the friendly little town of Murfreesboro. And, as is tradition, there is no admission fee and plenty of free parking.”

That “little” town will grow by leaps and bounds starting Wednesday as upwards to 40,000 visitors are expected at the festival over its four-day run.

As far as security goes, Murfreesboro Police Chief Darrell Rowe said there is a plan in place, one where law enforcement officers on foot and motorized patrols work in unison.

“We try to make it as safe as possible for people while they’re here,” said Rowe.

The Murfreesboro Police Department receives assistance with the festival crowd from law enforcement agencies from all across the Roanoke-Chowan area. Rowe said during the peak hours of the event, 15 to 17 officers at a time are patrolling the festival grounds.

The festival’s opening day (Wednesday) is highlighted by an appearance by the TFC Band (8-11 p.m.) on the Broad Street stage “The Janitors” will open the evening of musical entertainment at 5 p.m.

Also on Wednesday’s agenda is the Murfreesboro Chamber of Commerce’s spaghetti dinner (4-7 p.m.), amusement rides (the midway opens at 6 p.m.with a $20 “ride all night” special ) and “Melon” (a Bingo type game, starting at 7:30 p.m., featuring loads of prizes).

The North Tower (8 p.m.) is the featured musical entertainment on Thursday. That day’s agenda also features a trout dinner sponsored by the Murfreesboro Rotary Club (4:30-7 p.m.), the Hotcakes Band at 5 p.m., another round of “Melon” and amusement rides ($20 “ride all night” special).

Saturday is the festival’s biggest day – beginning at 7 a.m. with a pancake breakfast at Murfreesboro Baptist Church and ending with the Coconut Groove Band performing from 8-11 p.m. on the main stage. In-between is the state’s largest agricultural parade (10 a.m. on Main Street), a 5K road race, the crowning of the 2011 Watermelon Princess, the selection of Little Mr. and Miss Farmer, watermelon eating and seed spitting contests, amusement rides, a full afternoon/early evening line-up of entertainment (bands, clogging groups and solo artists) and a huge display of fireworks (9:15 p.m.)

For those looking to satisfy their hunger pains, a food court, featuring a wide range of goodies, will be open each of the four days. Also, be sure to visit the main tent where free slices of delicious, homegrown watermelons will be served.

COLERAIN – Over three months have passed since a pair of twisters tore a path of death and destruction through... read more