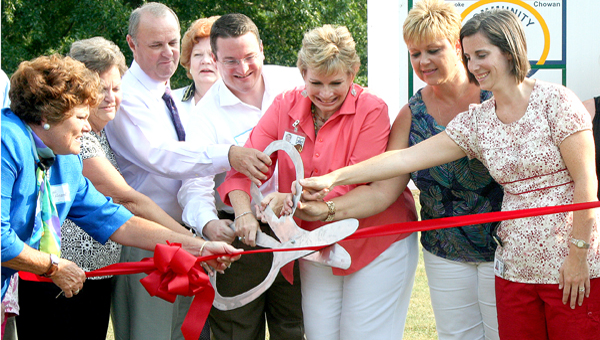 Roanoke-Chowan Community Health Center CEO Kim Swartz (third from right) has plenty of help as she cuts the ceremonial ribbon to formally re-open a completely renovated Murfreesboro Primary Care. The office was the scene of a Business After Hours event Thursday evening hosted by the Murfreesboro Chamber of Commerce. Staff Photo by Amanda VanDerBroek

MURFREESBORO — Welcomed renovations and an expansion to Murfreesboro Primary Care was celebrated by the business community and Roanoke Chowan Community Health Center officials at a Murfreesboro Chamber of Commerce Business After Hours event.

The gathering was held on Thursday at Murfreesboro Primary Care where updates as well as an addition were recently completed to the medical office thanks to a grant from federal stimulus funds.

Chamber officials along with area business leaders toured the revamped facility that boasts an additional 1,400 square feet for Murfreesboro Primary Care providers and staff as well as their patients.

“We had a big turnout from all across the community for this Business After Hours, and it was a great way for Murfreesboro Primary Care to showcase all the investment that they put into their new and improved facilities,” said Joshua Barker, Chamber of Commerce President. “The Chamber of Commerce loves to support and promote advances in the area like this, which go to the betterment of our community as a whole.”

According to RCCHC CEO Kim Schwartz, remodeling and expansion took approximately 15 months (of which the office was close only one-half of a day) and was funded by a stimulus grant in relation to RCCHC being part of a federally qualified health center (QHC).

“It is actually what they call a program grant, meaning that you’re entitled to it based upon the number of uninsured patients we’ve served,” she said. “So we received a certain amount of money for every uninsured patient for the purpose of receiving access to care.”

The amount obligated to Murfreesboro Primary Care, which merged with RCCHC in 2005, was $256,681.

Schwartz noted the work done at the site is only phase one of the project. She said they are currently working on acquiring property at the rear of the building in order to expand the parking area and add a circular drive for phase two.

Of RCCHC’s 25,000 patients, Murfreesboro Primary Care has approximately 10,000 of those clients on the rolls in the office that has five medical providers.

Daniel Glaze, Chairman of the RCCHC Board of Directors, said he was pleased with the end result of the project and hoped the community would be just as content with the renovations.

“I’m glad to see it done and completed, and I’m thrilled that everyone was able to continue seeing patients, taking care of folks through the whole thing,” he said. “We are going to be able to increase our capacity in serving the community.”

Schwartz said in the end the renovations and additional space will enable better care for patients.

“Really the key thing is having more access to care, being able to see folks in a more timely and efficient way,” she said. “Same day care, that’s our hope, that if somebody calls that day they can get in that day, and they do a fantastic job here.”