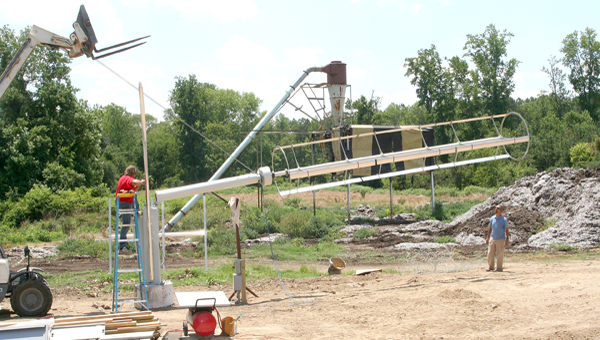 Mike Miller (on ladder) and Jeremy Peang-Meth (right) work in tandem with a lift mechanism to slowly erect a wind turbine at the Northampton County Memorial Library in Jackson. Staff Photo by Amanda VanDerBroek

JACKSON — It was an unusual sight to behold on Friday as the second of four Windspire vertical wind turbines rose above the Northampton County Memorial Library.

While the wind turbines are a sight to see in a small town like Jackson, they’re also a sign that the library will be more energy efficient. In fact, the project will be the first retrofitted building with the green features in the southeast.

The “green” additions to the library facility are just one part of a project fully funded by grants from the Golden LEAF Foundation ($433,902) and the U.S. Department of Agriculture Rural Development ($108,000) which added 2,596 square feet to the building with the construction. A new computer room, complete with 18 new computers and accessories, a kitchenette and a multipurpose room are some of the new spaces in the library. Eighteen new parking spaces are also currently being added. A.R. Chesson from Williamston is the general contractor on the project.

“The most important thing is how can we do a green building, how to save energy,” Sujjavanich said.

Among the new energy efficient facets in the library are the vertical wind turbines that also have a solar cells to support energy creation. Solar panels on the roof of the facility will also power a hot water tank for the bathrooms.

“We changed from an old lighting to a new lighting (system),” Sujjavanich said. “That can save almost 75 percent of the (energy) used by the lighting system in the building.”

“We worked with Surapon on how to support his design, bringing down energy costs and also support the new lighting, parking lot lighting,” he said.

Light-emitting diodes (LED) will light the whole parking lot via those wind turbines.

He added if there is wind that will power up the parking lot lights as well. A back up battery bank has also been installed so if the power goes out, the building will have approximately eight hours of run time out of the LED lights when they come on at night.

“If there is an emergency situation around here they will still stay lit up,” he said. “As the wind picks up and hits about eight to 10 miles per hour, they’re really starting to power and that power will go right into the building and if the lights are on it will power up the lights and if not it will support the air conditioner or the heat pump, computers, whatever they’re running inside.”

The solar panel will create up to about 400 watts per hour and the wind turbine will max out close to 1,800 watts.

According to Sujjavanich, if there is no sun for the hot water heater solar panels the wind turbines will power the water heater as well.

“That means we will get 100 percent power from the wind and from the sun to heat the water,” he said.

In addition to the wind turbines and solar panels powering the building, Sujjavanich said they can also be a vital lesson to those who use the library.

“The librarian and staff can teach children about the green building and how to save energy,” he said.

Northampton Memorial Library Barbara Davis said she is excited about the project as it nears completion.

“It feels wonderful, we are just so happy” she said.

Gary Hoyle, Director of the Albemarle Regional Library, which serves Northampton, Bertie, Hertford and Gates counties, also shared his enthusiasm for the project and its green features.

“We’re excited about it…I guess in a way we’re a guinea pig,” he said. “I think Surapon said we’re the first retrofitted building in the southeast to have this technology.”

Steve Jackson, who serves on the library’s board, said he is looking forward to the end of a long journey to improve the library.

“I’m just waiting now for the final product,” he said. “I think the end product will be worth all the hard work.”

Davis said the library renovations and addition is slated to be completed by Friday (July 8).