Mr. and Mrs. Michael G. Drake of Newsoms, Va. are pleased to announce the engagement of their daughter, Wendy L. Drake to Adam B. Burgess, son of Mr. and Mrs. Steven R. Burgess of Conway.  The bride-to-be is granddaughter of Mr. and Mrs. Claude Drake Jr. of Newsoms, Va. and Mr. and Mrs. Miles J. White, Jr. of Franklin, Va. The groom-to-be is grandson of Alton Louis Smith of Boykins, Va. and the late Ruby Smith and also the late Mr. and Mrs. Randolph Burgess, who made their home in Conway. Wendy is a graduate of Southampton High School and North Carolina State University holding a degree in Agronomy with Concentrations in Soil Science and Crop Science, along with a minor in Agricultural Business Management. She completed her Master of Science at NCSU in Crop Science and is employed by Hertford County Extension as an Agriculture Agent. Adam is a graduate of Northampton County High School-East, as well as North Carolina State University holding a degree in Crop Science. He is a self employed farmer on the family farm in Conway, North Carolina. A September 2011 wedding is planned. 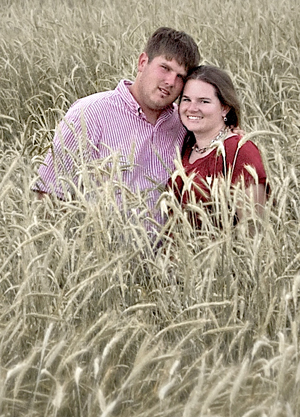