The bridegroom is the son of Donald Wayne Futrell Sr. and Lisa Clark Futrell of Conway. He is the grandson of Mr. and Mrs. Clarence Irvin Bush Jr. of Buxton, Mr. and Mrs. Coleman Jackson Clark Jr. of Colerain and Mr. and Mrs. Paul Jordan Futrell Jr. of Murfreesboro.

A program of wedding music was provided by Bert Steilme of Aulander, organist, and Kaitlyn Taylor Flythe of Tarboro, soloist.

Given in marriage by her parents and escorted by her father, the bride wore an Exclusive Bridal by Allure ivory strapless gown from Carolina Bridal World in Smithfield featuring a fitted A-line gown constructed out of soft organza. The fitted bodice featured embroidery and crystals while organza criss crossed. Organza continued to swirl throughout the skirt, creating a romantic silhouette.

For her headpiece, the bride wore her hair half up with a beaded trim veil. She carried a small bouquet of flowers and the rest of the bridal party had matching designs.

Elizabeth Coggins Beale of Seaboard, sister of the bride, served as matron of honor. Bridesmaids were Anne Bridgers Futrell of Raleigh, Sara Bennett Moses of Conway, Elizabeth Grey Thompson of Newport and Elizabeth Pope Vinson of Murfreesboro, all friends of the bride.

Donald Wayne Futrell Sr. of Conway served as his son’s best man. Groomsmen were Brandon Clark Futrell of Conway, brother of the bridegroom, Curtis Larry Knight of Conway, Logan Stuart Taylor of Jackson and Zachary Thomas Vinson, of Murfreesboro, all friends of the bridegroom.

A reception was held following the ceremony at Valley Pine Country Club in Lasker.

A dinner was held after the rehearsal at John’s Seafood in Murfreesboro, hosted by the bridegroom’s parents.

After a honeymoon in the Bahamas, the couple now resides in Conway.

A Christmas shower was held in December 2010 at the home of Mary V. Pope, and hosted by Gwen Bryant, Mary Pope, Carla Stephenson and Debbie Warren.

A bridal shower was held at the fellowship hall of Conway Baptist Church by family of the bridegroom in February 2011.

A bridal shower was held at the parish house of the Episcopal Church in Jackson in March 2011, hosted by family friends of the bride.

A girls night out and a guys night out was held at Nags Head in March 2011, hosted by the bridal party.

A bridesmaids’ luncheon was held at the home of Sallie Futrell in April 2011, hosted by Sallie Futrell, Nell Gay and Margaret Cooley. 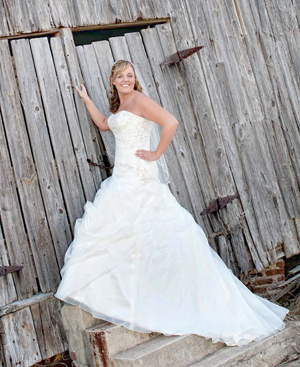