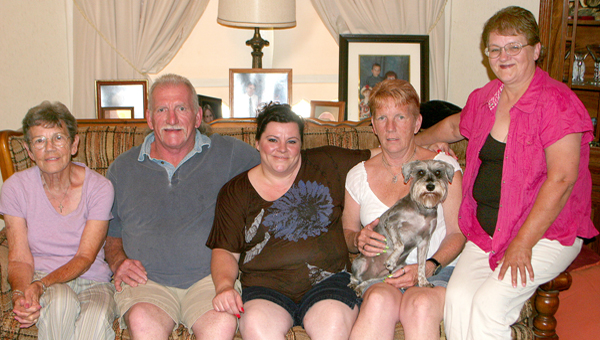 Larry Callis (second from left) and his daughter, Laurie Rodriguez (middle), met last week for the first time in more than 30 years. Rodriguez tracked down her father through the internet and the two had a great reunion. Other family members shown from left are Elizabeth Callis, Sonya Callis and Carla Nation. Staff Photo by Thadd White

HARRELLSVILLE – It was a Father’s Day more than three decades in the making.

Sunday, Larry Callis was able to really celebrate Father’s Day for the first time, despite having a 35-year-old daughter.

The celebration Callis and his daughter, Laurie Rodriguez, held Sunday was the culmination of several months of correspondence involving several members of the family.

Rodriguez is the daughter of Callis and Carla Nation, but was raised by Nation after the couple went their separate ways. Callis said he wondered many times if his daughter knew about him, but didn’t want to disrupt her life if she did not.

While Callis was in North Carolina wondering about his daughter, Rodriguez was in the state of Washington thinking of her father.

“She started asking questions about her father when she was about 10,” Nation said. “I gave her a snapshot and what little information I had, but it wasn’t much.”

Rodriguez began looking seriously in 2011, but didn’t know enough to find him.

“In mid-March, I was laying in bed one night and decided to get up and look on the computer again to see if I could find my dad,” she said. “I’m not sure what made me do it then.”

It took less than 15 minutes before she found her grandfather’s obituary on the internet. The listing for the family of Cecil Lawrence Callis gave her the information she needed to contact her father’s family.

“I looked on Facebook, but I couldn’t find him, but my aunt (Sonya Callis) came up,” Rodriguez said. “I spied on all her pictures and saw her brother Al and looked through everything for a little bit.”

Rodriguez said she then faced a dilemma of what she should do next.

“I thought, ‘gosh, what do I do now’,” she said. “I decided to write my aunt and see what happened.”

Sonya Callis said she was looking through the information on Facebook the next morning and received a friend request from someone she didn’t recognize.

“I’m addicted to Farmville, so I get friend requests from all over the world,” she said. “I decided to click on the more information and it said ‘I think I’m your niece’.”

Callis called her mother, Elizabeth Callis, and told her what she had read.

“I was on cloud nine and I stayed there,” Sonya Callis said.

Sonya Callis accepted the friend request and sent a message back immediately. She said she spent the rest of the day looking for a response from Rodriguez.

Rodriguez said she didn’t know what kind of response she would get.

“I must have been expecting something or I wouldn’t have looked, but I didn’t know it would be this easy,” she said.

Elizabeth Callis said she was glad her family heard from her granddaughter, but was shocked at first.

“I didn’t know what to think,” she said. “It took a while to grasp everything.”

Larry Callis said he wasn’t sure what his sister was going to say when she began telling him about Rodriguez contacting her.

“She’s always telling me ‘you’ll never guess who I found’ so I wasn’t sure what she was going to say,” Larry Callis said. “When she told me, it was like it filled a 35-year hole in my life instantly.

“I went from a broke down truck driver to a dad, a granddad and a great-granddad in one click,” he said.

Rodriguez quickly began communicating with her father and the members of his family and said she was on the telephone constantly.

Nation said that was exactly what she wanted.

‘I wanted Laurie to have a strong sense of self,” Nation said. “I sent photos of her to Elizabeth and her husband, but we lost communication. Somehow, over the years I lost the address.”

Nation said she gave her daughter all of the information she had about her father and was excited when Rodriguez found Larry Callis.

“I was very happy for her,” Nation said of her daughter. “She wanted that connection and I’m grateful for the way they took her in.”

Also lost during years of moving were the baby photos of Rodriguez, who had never seen photos of her as an infant until she arrived in North Carolina last week and was shown the ones her father and grandmother had kept of her.

Discussions among the group quickly turned to getting Rodriguez to North Carolina so she could meet her father and his family face-to-face. Rodriquez has a daughter and two grandchildren and everyone wanted to make the trip.

It was eventually decided that Rodriguez and Nation would make the initial trip.

“After we thought about it, we decided it would be better for the first meeting if just two of us came and that’s been good,” Rodriguez said.

The group said the meeting had been relaxed and easy and they had all felt comfortable together.

The family also said the relationships had quickly become exactly what they should be.

“It just filled a hole in my life,” Larry Callis said. “It’s not there now and it almost seems like it never was.”

“I didn’t have any idea what this would be like,” she said. “I sent the message not knowing if anyone but my dad knew about me. It was like a fairy tale after that.

And with Father’s Day and the anniversary of her father’s death within a week, Sonya Callis said she is remembering how the family was reunited.

“It was divine intervention,” she said. “Of all the things that could come up in the search, she got my father’s obituary which gave her all the information she needed. In my heart, I will always believe my father helped her find us.”

However, things worked out as Rodriguez, her father and the rest of her family are glad they are now together.

“It worked out the way it was supposed to,” Larry Callis said. “There hasn’t been a single thing bad about it; not one thing.”

Five will play on