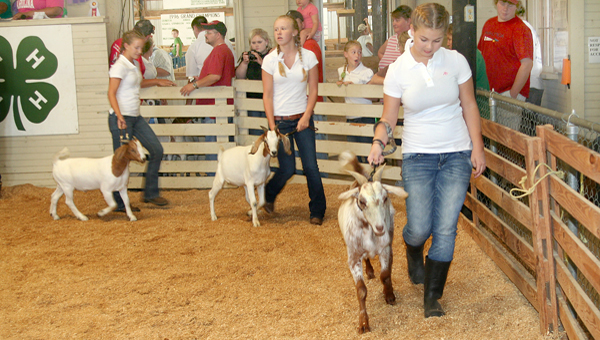 Goat participants parade their animals on Wednesday during the Hertford-Northampton Livestock Show and Sale held at the livestock arena in Murfreesboro. Staff Photo by Amanda VanDerBroek

MURFREESBORO — After months of raising their animals, 34 local 4-H’ers finally saw their hard work pay off.

On Wednesday, the exhibitors, ranging in age from 5 to 18, got the chance to demonstrate their hard work at the Hertford-Northampton 4-H Livestock Show and Sale.

The 4-H’ers, hailing from Bertie, Hertford and Northampton counties, showed their farm animals (species include lambs, hogs, goats, steers and heifers) competing in market class and showmanship. The show has been a tradition in the Roanoke-Chowan area for 29 years.

“We had a good turnout, everybody seemed to enjoy themselves and we hope the kids learned something from their experience,” said Northampton County Cooperative Extension Livestock Agent Lee Tyre.

Hertford County Cooperative Extension Director Crystal Smith, who served as the mistress of ceremonies, agreed the event was a success.

“It was a feel good day for all counties involved,” she said.

Smith said the three counties are fortunate to have a livestock barn to host the show each year. A local citizen allows the use of the property each year, as long as it’s used to keep the tradition going.  She added logistics keeps the title of the livestock show from including Bertie in its name.

Each of the livestock exhibitors works with, cares for and studies their animal for weeks before the show. Tyre said for hogs, lambs and goats the 4-H’ers must have them for a minimum of two months while the steers and heifers must be kept for a minimum of three months.

“A lot of the families keep them longer than that,” he said.

Tyre said the experience of raising the livestock animals touches on both agriculture and business. The 4-H’ers are not only responsible for the animals well being (making sure it’s fed and has water), but going out to solicit sponsors and buyers for the event as well as maintaining financial records.

Smith said raising the animal also helps the 4-H’ers gain self respect and build self esteem. Based on he latter attribute, Smith saw one typically reserved young man gain this year.

“We saw a different person when he entered the show ring,” she said.

During the market (or breeding) class the animals are judged on muscular development, finish, structure, size and carcass quality. A grand and reserved champion is named for each species.

Meanwhile in showmanship, the exhibitor is judged on how well they show their animal. Eye contact with the judge and a thorough knowledge of their animals are just two attributes that the participants are judged on. The exhibitors are placed in divisions based on their age and experience.

This year’s judge was Andy Burlingham, Livestock Extension agent for Pitt County. A graduate of Kansas State University, he grew up showing in youth shows, and as an active member of the Pitt County 4-H Judging Team, he competed on the 4-H Judging Team at the national level.

Later in the evening the animals are sold during an auction and 100 percent of the proceeds from each animal going to the respective 4-H exhibitor.

Both Harris and Taylor also did well in the hog Showmanship competition with Harris taking first in the Junior category (ages 9-13) along with her brother, Gregory Harris, who placed second. Brittany Vandiford and Justin Jones were also recognized for their participation in Junior Showmanship.

In the Steer Market Class, Charles Harden of Bertie County earned Grand Champion with his animal, which was auctioned to Bertie County Farm Bureau and Harden Farms (Ronnie and Deborah Harden).

Chamblee took Reserve Champion with his steer, which was purchased by Hertford County Farm Bureau. He also took Grand Champion in the Heifer Market Class. His animal was purchased by Phil Coggins Insurance, Jesse E. Vaughan Farms and Metal Tech.

To round out his day, Chamblee was also honored later in the evening with the Bill Bridgers 4-H Scholarship.

Lamb Grand Champion went to Senior participant Bridgette Vandiford of Northampton and her animal, which was purchased by Rich and Rich Auction and Steve and Laurie Burgess.

GATESVILLE – While plans move forward on the Merchants Commerce Center near here, one of the major “players” in that... read more