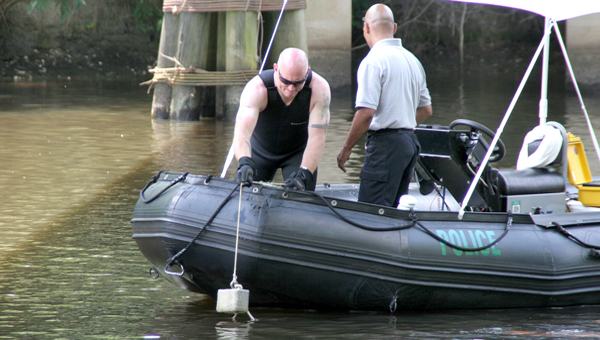 Riding on board a Portsmouth, Va. Police boat, a Southampton County Sheriff’s deputy drops a rope into the Meherrin River for use as a guide line for three divers searching for evidence in a two-state spree.

MURFREESBORO – Battling dark, murky waters cluttered with debris below the surface, a dive team from Southampton County, Va. failed to find a piece of evidence here Wednesday connected with the March arrests of numerous individuals on B&E and arson charges.

Four divers from the Southampton County Sheriff’s Office were joined by two lawmen from the Portsmouth, Va. Police Department operating a sonar device from a boat operating beneath the Mayor Billy Hill Bridge (US 258) that spans the Meherrin River.

The Virginia-based law enforcement officers searched the river on a request from Murfreesboro Police Chief Darrell Rowe and Hertford County Sheriff Juan Vaughan. The search stemmed from information received from one of the five individuals arrested following an alleged crime spree that involved at least 19 robberies and five cases of arson in two states.

The sonar “hit” on two items on the river bottom; divers were sent down to search. The dark water beneath the surface produced zero visibility in some spots. The divers also encountered numerous fallen trees and limbs, making their search area tougher to navigate.

“As we continued the investigation into this series of crimes, one the suspects shared information concerning that an item stolen in Southampton County was thrown in the river from this bridge,” Sheriff Vaughan said while watching the divers from the shore.

In particular, the Sheriff stated the search centered on a home safe, stolen from the residence of Leon Bolton of Burnt Reed Road in Boykins, Va. After stealing several items from the Bolton residence, the suspects burned the home to the ground.

“It’s a slow search with the water the way it is today,” Sheriff Vaughan said. “About all the divers can do is feel around.”

“We really appreciate the help of the Southampton deputies and the Portsmouth Police,” Chief Rowe said. “We’ve always enjoyed a great working relationship with our fellow officers just over the state line. That type of cooperation has helped all of us solve many crimes.”

Those charged, to date, include:

Lionel A. Walden, 21, Conway; he faces 23 charges, most felony counts, to include breaking-and-entering (B&E), larceny of firearms (9 counts), possession of firearms (4 counts) and possession of a firearm by a felon. His bond was set at $1.3 million.

Antonio L. Holley, 22, of Mapleton Road, Murfreesboro; charged with possession of stolen firearms (4 counts) and possession of a firearm by a felon. Bond was set at $275,000.

Those four were all arrested at a residence located at 1200 East Main Street, Murfreesboro. That residence was one of five searched by law enforcement officers in late March (two in Murfreesboro; three in Mapleton). Numerous items were seized and cataloged for evidence. Rowe said due to the high number of B&E/larceny cases, several victims were contacted and arrived in Murfreesboro on the day following the arrests in an effort to identify the personal property.

To date, only Holley and Barber have posted bond.

Charges were filed by the Hertford, Bertie, Northampton and Southampton County sheriff offices, to include arson, breaking and entering and larceny. Arson cases were investigated at the historic Harrington Lodge near Lewiston-Woodville, a residence at the Rhodes community (also in Bertie County), at a pair of dwellings in Hertford County (Beaver Dam Road and Log Cabin Road) and in Boykins, Va.

Trail dates are pending for each suspect.

On June 27, NC DOT will close a short section of US 13/NC42 just south of Ahoskie to replace two... read more