GREENVILLE – Anne Marie Greene and Lindsey Price Harrison III, both of Greenville, exchanged wedding vows during a 5:30 p.m. outdoor ceremony on Saturday, May 14, 2011 at the Greenville Country Club in Greenville.

The bride was given in marriage by her parents and escorted by her father.  She wore the SaBelle, a one-piece strapless, full A-line, diamond-white wedding gown, from Maggie Sottero Collection, with beaded corset closure.  This striking silhouette, in rich Bordeaux Taffeta, features cascading bustles draped asymmetrically over and embellished lace skirt.  Beaded lace accents the gentle sweetheart neckline and surrounds the signature lace-up back.  Handmade flowers were nestled within the bustles of the skirt. She carried a bouquet of white roses, orchids, and spider mums, wrapped in her grandmother’s handkerchief.  The bride’s finger-tip length veil was borrowed, hand-sewn, and embellished.

The groom is son of Price and Kim Harrison of Enfield. He is the grandson of Sarah Willey Harrison and the late Lindsey Price Harrison Sr. and the late Mr. and Mrs. Aubrey McCoy Cooke.

Sandra Kimbrell Livermon served as the Mistress of Ceremonies.  The reception was directed by Susan Greene Buck.  Debra Ann Greene and Jennifer Ashley Cowan served as program and guestbook attendants.

The reception was hosted by the parents of the bride at the Greenville Country Club.  Entertainment was provided by Shaggin’ on the Beach with Jay Jenkins of Woodland and The Castaways of Durham.

Following a honeymoon aboard a cruise to the Caribbean the couple is residing in Greenville. 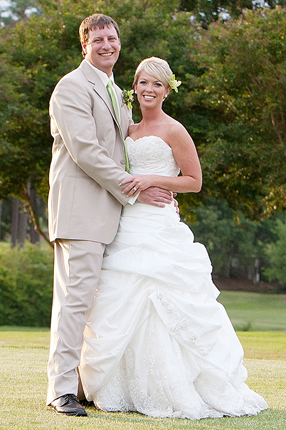