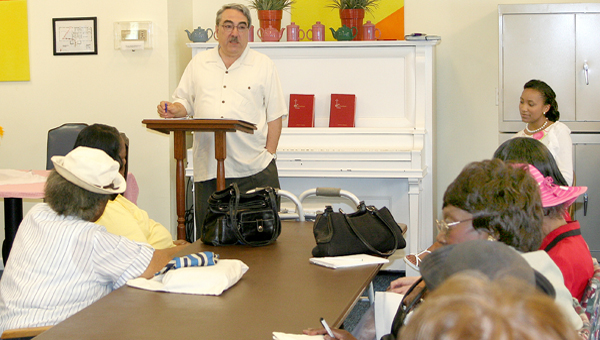 JACKSON — With the country trillions of dollars in debt, government welfare programs are within the crosshairs for federal cuts.

On Monday, United States Congressman G.K. Butterfield (D-1st) made a stop at the J.W. Faison Senior Center to tout against the “Ryan Plan,” which would cut federal funding to programs like Medicare and Medicaid in order to get the national deficit under control.

To Butterfield, that deficit, which now stands at $14.3 trillion according to the congressman, is “the problem.”

“The problem that we have, ladies and gentlemen, is that we’re running a $3.5 trillion government on $2 trillion,” he said. “You cannot do it.”

Butterfield said 80 percent of the money the country is spending is going to Medicare, Medicaid, Social Security, Military and Homeland Security.

One of the influences creating the deficit is the rising costs of healthcare, Butterfield said, which, if not controlled, will eventually bankrupt the nation.

Butterfield said the first thing that was done to help stabilize the economy under President Barack Obama’s administration was to pass healthcare reform to get that spending under control.

“It is a step in the right direction,” he said. “We cannot have 50 million Americans with no insurance, we’re not that type of country. We cannot have another 175 million people who have insurance and for some of them it’s not worth the paper it’s written on.”

Currently, according to Butterfield, there are 48 million people on Medicare, typically assigned to senior citizens, and the number is expected to almost double over the next 20 years as the Baby Boomer generation continues to age. The cost for Medicare is currently costing the federal government $523 billion a year.

As for Medicaid, a program typically for low-income families, adults with disabilities and children, Butterfield said there are 68 million people benefiting from the program with a price tag of $381 billion a year.

“Medicaid in my district, our district, amounts to about $2.2 billion,” he said.

With those facts taken into account, Butterfield said solutions must be identified.

He noted how the Republican Party controls the House of Representatives, while the Democrat Party has the majority in the U.S. Senate. He added in order for anything to pass, all three, including President Obama, must be on the same page.

“The Republicans, since they are in the majority now, they have the responsibility of coming up with a proposal,” he said. “They have put a proposal on the table, which has caused me a lot of pain. It will cause you a lot of pain when I explain it to you.”

Butterfield spoke about how the “Ryan Plan,” introduced by Wisconsin Republican Representative Paul Ryan, would impact both Medicare and Medicaid.

The congressman said the proposal is to cut $4 trillion over the next 10 years in which two-thirds will come from low-income programs.

Butterfield said the plan would “do away with Medicaid” and instead turn what funds are left, after a $771 billion cut, over to the state governments and create a block grant program, all by next year. He said states would then have the burden to maintain the services.

“That’s his (Ryan’s) first option, the state can raise taxes to aid poor people,” Butterfield said. “You know it and I know it, it won’t happen.”

Butterfield said the next option is to cut services to make ends meet or the state would have to cut payments to medical providers.

“So at the end of the day either the state taxes will go up or services will go down,” he said. “Or states will shift the cost to the low-income person.”

Butterfield said Medicare is also in line to be phased out within 10 years under the plan. He noted those over 55 years old would not be affected.

He added the plan would give seniors a voucher to purchase their own insurance.

“That voucher will not be enough to pay for insurance,” he said.

Butterfield said those against the plan are ready to engage in a fight and to take the issue head on “to make sure it does not happen.

He also added $350 billion is on the chopping block from mandatory programs (education, training, employment, social services), which have not been specified, and $400 billion from discretionary programs (highway, water systems, etc.).

He added that low-income people and senior citizens cannot bear the cost alone in balancing the federal budget.

After his speech, Butterfield opened the floor for questions from the audience.

Evelyn Jones of Jackson questioned Butterfield about the healthcare reform bill and the $600 million that was taken out of Medicare for the reform.

Butterfield responded that the “affordable care act” is going to cost $1 trillion, but it was “paid for” with $500 billion in savings from Medicare.

“We’re beginning to see the impact of that,” he said.

He added the other $500 billion will be from increased revenue from oil companies and wealthy Americans.

“I make the argument that the affordable care act does not add to the deficit, it actually improves it,” he said.

Ruby Ward questioned how citizens could petition against the “Ryan Plan.”

Butterfield suggested spreading the word through local churches and civic clubs and groups, but encouraged citizens to do their own research.

“Check it out for yourself,” he said.