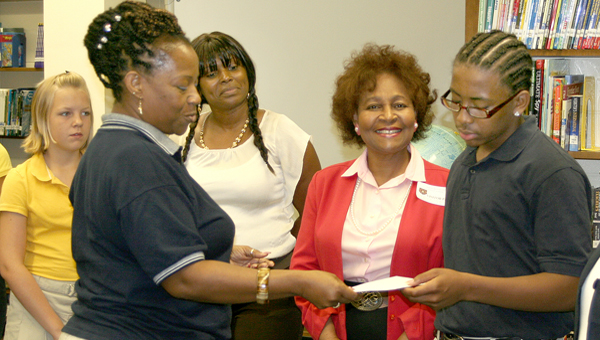 MURFREESBORO — Despite the cloud of destruction and grief around them, two young tornado survivors have found a ray of hope.

Last week, Jodeci Taylor of Harrellsville and Tony Mitchell of Ahoskie found that hope in their own peers at Hertford County Middle School.

The school’s Future Business Leaders of America (FBLA) presented Taylor and Mitchell with a $208.50 check each. The money is from a FBLA Relief Benefit specifically for the two eighth graders with donations coming from students and staff of the school.

“When we found out some of our own were affected (by the storms) we decided to do something here,” said Parker.

The group formulated a list of approximately eight students affected by the April tornadoes and narrowed it down to those greatly distressed by the storms.

Taylor and his grandmother, Oleathia James, whom he lives with, had their home completely destroyed near Harrellsville by the destructive storm that spawned two tornadoes and killed 12 people locally.

Meanwhile, Mitchell lost his grandmother, Dorothy, whom he often lived with and kept clothing at her Glover’s Crossroads home near Colerain.  Several other members of Mitchell’s family were also severely injured at the same location and the family’s home place, which has been owned by the Mitchell’s since the Great Depression, was leveled.

Evonne Mitchell, Tony’s great-aunt, said this was the second tragedy to befall the young man as in January an electrical fire destroyed his belongings in Ahoskie.

The FBLA Club spearheaded the fundraiser and collected $417 in donations from those in the school. FBLA President Claudia Rowe, Treasurer De’era Wilkins and member Alexia Pope recalled soliciting for donations.

Pope said the group publicized the effort, held from May 2-6, with flyers.

Wilkins said she wished people would have given even more, but was happy with the results.

“I feel like we did pretty good,” she said. “I’m happy with those who donated.”

Rowe said she was proud of her school for reaching into their own pockets to help those in need.

“If all that happened to us I’m sure they would want to help too,” she said.

Parker and Perry joined Pope, Wilkins and Rowe in presenting the checks to Mitchell and Taylor.

Taylor said the donation made him feel “very special.”

“I feel like everybody cares about me,” he said.

Both Taylor and Mitchell plan to use the money for new clothes and school supplies.

While he plans to replace material things with the money, Mitchell’s thoughts turned to his grandmother and their close relationship after the check presentation.

“She was like a mother to me, but beyond that,” he said.

WOODLAND—A woman here is facing a prostitution charge after being arrested by an undercover agent. According to Northampton County Sheriff... read more