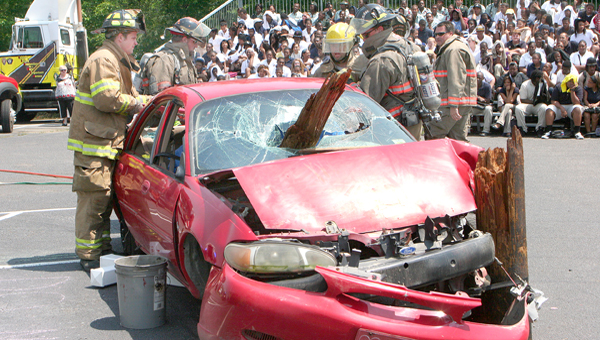 Students of Bertie County Public Schools look on as emergency workers begin the task of extricating the driver of a mock accident, an event used as a teaching tool about the deadly consequences of distracted driving. Staff Photo by Thadd White

WINDSOR – It can happen.

If you’re not careful in how you drive, it will happen.

That message was sent to Bertie High School students here Thursday when they participated in the VIP for a VIP Program. The Vehicle Injury Prevention for a Very Important Person was brought to Bertie through an effort of Bertie County Schools and the Bertie County Sheriff’s Office.

“It was timely, meaningful and relevant to students and adults as well,” Bertie High School Principal G. Fisher Mitchell said. “There are some things they talked about that I’m guilty of – or at least was guilty of beforehand.  I no longer answer the telephone while I’m driving.”

Mitchell said the day after the program he learned of the death of a high school student in Duplin County and that further made the program real for him.

“I think it was a reminder for all of us – the students and those adults in attendance – that we always need to be attentive to driving when we’re behind the wheel,” Sheriff Holley said. “It is easy to become distracted and that is when most accidents happen. Hopefully our young people got that message.”

Sheriff Holley said he wished the program was a periodic one, because it would help keep it in the minds of young adults.

The VIP Program contains two sessions, one done in the morning and the other in the afternoon.

The morning session allowed students to hear from emergency service personnel and parents of teenage accident victims. They also viewed two video presentations and hear statistics about accidents among teens.

The afternoon session saw students assembled in the parking lot of the high school. There, they observed a reenactment of a fatal automobile accident.

It began with the teen driver slumped over a steering wheel and a jogger coming up on the accident scene. The jogger called 9-1-1 and then students were able to hear all of the emergency transmissions from central dispatch to police, fire and rescue personnel.

The VIP for a VIP program started in 1998 when two off-duty firefighters came upon a vehicle accident that had just occurred involving two teens. The first program was delivered in the spring of 1998 and every spring and fall since that time.

R.K. Bulla, the Captain of the High Point Fire Department, was also complimentary of the help they received from the local emergency personnel and the attentiveness and cooperation of the students and staff of Bertie High.

SEVERN — A Franklin, Virginia man is facing charges and more arrests are pending after an armed robbery here. According... read more