‘May we never forget’ 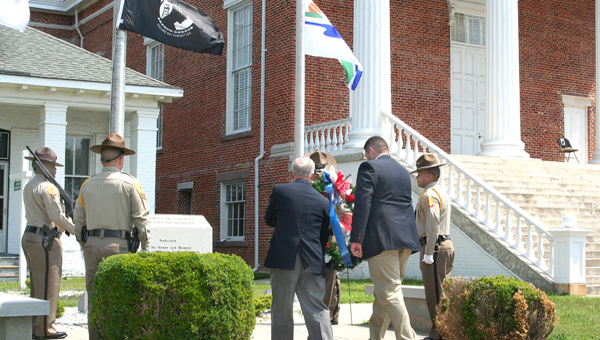 JACKSON — The true meaning of Memorial Day comes from those who know military service and sacrifice first hand.

“May we never forget.”

Those were the words spoken by the Rev. Willie McLawhorn of Conway on Monday as he addressed the crowd that gathered near the Northampton County Courthouse.

Five months ago, McLawhorn’s son, US Army Sgt. Will McLawhorn, was killed in action while serving in Afghanistan. Rev. McLawhorn and his wife, Diane, were recently awarded the Gold Star Lapel Pin for their son’s sacrifice.

McLawhorn, a veteran of the United States Air Force, served as the guest speaker of the annual Northampton County Memorial Day Ceremony.

“I, like my father, am a veteran. I am and was proud of serving in the armed forces,” he said. “I was serving during the Vietnam War, though I never made it to Vietnam.”

McLawhorn continued by saying he had a cousin who served in Vietnam as a medic as well as friends who were infantry men and gunners.

“I have a son who proudly got into the uniform of the United States Army. He wore his medals and the patch of the 101st Airborne with pride. He was recently killed in action on December 12, 2010 in Sangsar, Afghanistan,” Rev. McLawhorn said. “I know what Memorial Day is about.”

McLawhorn spoke of the more than one million service members who have died in the wars and conflicts of the nation since the first colonial soldiers took up arms in 1775 to fight for the United States’ independence.

“Each person that died during those conflicts was a loved one, who had a family that cherished them, who had friends who loved them,” he said. “Each one who gave up his or her life was a loss to the community and to the nation.”

McLawhorn recounted the history of Memorial Day, which has roots dating back to 1868 when an order was issued by Gen. John Logan to establish a day of remembrance for those soldiers who died during the Civil War.

“We had just come through a terrible ordeal in which brothers were fighting against brothers,” he said.

May 30 was the day designated for the observance and flowers were placed at the graves of fallen soldiers of both the Union and Confederate armies. The first observation of Memorial Day came in 1873 and in 1971, with passage of the National Holiday Act, the last Monday of May was designated for the national holiday.

“Today for many of us the Civil War, the Spanish-American War, World War I, World War II and the Korean War are ancient history; the Vietnam War is a fading memory,” he said. “Over the recent (time period)—Operation Desert Storm, Enduring Freedom and Iraqi Freedom—we the American people have once again been thrust into a position of remembering those fighting and dying today.”

McLawhorn said the essence of Memorial Day lies within a vow taken by each military member.

“Memorial Day, for all soldiers, is embodied in the words of the oath that we, who are veterans, first take when we enlist in the service of the country,” he said.

McLawhorn recited the oath that has soldiers vow “to support and defend the Constitution of the United States against all enemies, foreign and domestic.”

“This oath taken by each and every solider exemplifies the reason why soldiers do what they do each and every day,” he said. “Today’s soldiers, as those in the past, are the defenders of the same principles that made this country great.”

McLawhorn said soldiers stand as patriots to defend and protect the ideas and sentiments in the Constitution as well as bear true faith and allegiance to that document and work and live within the codes of military justice.

“These truths are evident in the everyday lives of soldiers,” he said.

He added the public should not forget those words spoken by soldiers upon their enlistment.

“When we look upon a returning solider from conflict or a disabled veteran or a grave marker those words are his oath to engrain in our conciseness,” he said.

McLawhorn concluded his speech by quoting President Ronald Regan while remembering those who have given their all and reminding all to never forget them.

“As we honor their memory today, let us pledge their lives, their sacrifices, their valor shall be justified and remembered for as long as God gives life to this nation,” he said. “And let us also pledge to do our utmost to carry out what must have been their wish: that no other generation of young men will ever have to share their experiences and repeat their sacrifice.”

“Americans view Memorial Day as the unofficial beginning of summer. Many of us spend this weekend having picnics, barbeques and trips to the beach, but those of us who have ever put on uniform, and the family members who have supported them, Memorial Day is a special holiday,” Futrell said. “It is a single day in which we honor the spirit of all those who served our nation and who we continue to remember in our hearts.”

Futrell later joined Northampton County Manager Wayne Jenkins in laying a wreath at the memorial in front of the flags near the courthouse. Deputies from the Northampton County Sheriff’s Department served as the ceremony’s honor guard.