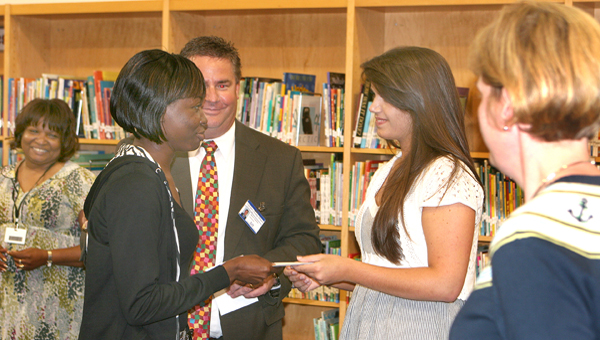 Camden County Schools proved itself to be just that last week when they delivered $3,800 and other donations to the families of students at Colerain Elementary School who were devastated by the April 16 tornadoes.

“Today shows us that we are not the only ones that want to help,” she added. “Camden County has been kind and they want to help as well.”

Hawkins said he had seen tragedy because he was principal of Perquimans Middle School when the roof was taken off while it was open as a shelter. He said that made him even happier with the work his school district had done to help.

Led by Thornhill, who made helping families in Colerain her Senior Project, and Banks, who served as a Guidance Counselor at Colerain in 2000, the school district raised $3,800 through a program called “Coins for Colerain.” They also brought food, personal care items, clothing and school supplies.

Envelopes went around to each classroom in the Camden school district and students gave a bulk of the funds that were donated.

“It’s a great feeling to know I’ve helped the community in some way,” Thornhill said. “I’m very glad I started this project.”

Hawkins said he was extremely proud of the efforts of his students.

“Andrea was already working to do something to help the community and this kind of fell in to her lap for her project,” he said. “I’m very proud of the students in Camden County.”

Banks said the $3,800 was divided into 10 gift cards which were given to each family (one family had two students involved in the tragedy).

Bertie County Board of Education Chair Gloria Lee spoke on behalf of the school district. She said she was thankful for the donations given to the families who had suffered.

“We are very, very thankful you chose to show this humanitarian effort toward our students,” the school board chair said. “Thank you for your kindness, thoughtfulness and generosity.”

Each of the nine families from Colerain Elementary that were directly affected were invited to the presentation. Some family members were able to attend while others were not due to on-going issues because of the tornado. Each of the nine students and one faculty member were presented the gift cards personally.

After the presentation, Principal Lee said she was thankful for the help provided to her students.

“It means a lot because even though we have tried to do as much as we can here, we welcome others who come and help,” she said. “We can’t do it alone.”

Lee said she received a telephone call the week after the tornadoes letting her know Camden County Schools wanted to help.

“I wasn’t really surprised,” she said. “It just reinstills in me that people are concerned about people. It gives you faith in mankind, especially when you see that children are giving and that their hearts are in the right place.”

JACKSON — Northampton County Schools is in line to see a reduction of more than $300,000 from their local appropriation.... read more