Lyons to retire at Bertie

WINDSOR – They will call her ‘Coach’ forever.

Alas, Alice Lyons, will soon place the word retired in front of that moniker, however, as she gives up the day-to-day teaching and coaching she has known for three decades.

“It’s just like everyone says, when it is time you’ll know it and I’ve been looking forward to this for a long time,” Lyons said. “Now it is time and I’m ready.” 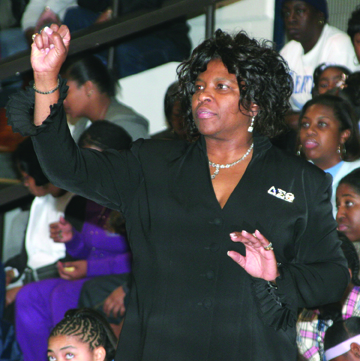 Lyons officially announced her retirement from teaching and coaching earlier this month, but will continue her role in the classroom until the end of the 2011 school year.

She has won more than 600 basketball games in middle school and high school during her coaching career. She has twice won the North Carolina High School Athletic Association Sectional Championship and is a multiple time Coach of the Year.

A graduate of Bertie High School, Lyons was a standout athlete in her prep career before going on to play collegiately at North Carolina A&T University.

At A&T, Lyons was a four-sport athlete competing in volleyball, basketball, softball and track. She was so good during her tenure with A&T that she was inducted into the school’s sports Hall of Fame in 1998.

Following her graduation, Lyons coached Kizer Junior High School in Greensboro and Ahoskie and Murfreesboro Middle Schools before returning to North Carolina A&T for two years as a coach.

She left that post to take a job in Bertie County in 1984 and has spent the remainder of her career in the public schools of her native county.

She also led her team to the Northeastern Coastal Conference Championship six times and was named a coach of the North Carolina All-Star East Team in 2006.

Lyons said as she looks back over her career, she’ll remember both the exciting games on the basketball court and the amazing young women who played for her as well as the students in her classroom.

“I think I’ll remember a lot of exciting games,” the coach said. “I also will remember the children’s who lives I’ve touched. It matters that I feel like I made a difference in their lives.”

As she prepares for retirement, Lyons said she is looking forward to spending more time with her family and touring to see Jessica Breland play for the New York Liberty in the WNBA.

Lyons said there were a lot of accomplishments she was proud of, but the one freshest in her mind was having Breland make the WNBA.

“The top one right now is getting a player of mine into the WNBA,” she said. “I am also very proud of the times we made it to the regionals and I will always remember the buzzer-beater games.”

Lyons said one thing she was especially proud of was that her student-athletes had always been students first.

“I have always stressed the importance of being a good student,” she said. “I’ve always been the coach who checked grades.”

Over the years, Lyons admitted she had opportunities to coach at other places, but had decided to stay at Bertie.

“It’s that Falcon pride,” she said. “I love Bertie. Someone gave me the opportunity to make something of myself and I wanted to give the students here that same opportunity.”

Lyons credited her high school coaches – Ron Cooke (basketball) and Shelton Bond (track) as well as her collegiate mentor Joyce Spruill with being coaches who made a major impact on her life.

She also was pleased with her relationship with the boy’s coaches at Bertie over the years beginning with the late Darwin Harper and continuing with Calvin Moore and her son, Lester Lyons.

“It was definitely a pleasure to come back and work with Coach Harper because he was here when I was in school,” Lyons said. “Coach Moore always told me I put too much pressure on him because the girl’s won so much and then Lester reversed that pressure because he won the Sectional the first year he was here.”

The coach was also pleased with those who have served as her assistants.

“They are my jewels,” she said. “All I’ve ever had to do was let them know what I wanted to do in practice and they took over. If I ever decided to coach at the college level, they would be the first people I would call.”

Lyons has been a part of the Bertie High School family for 30 years and she said that will not change.

“When I’m in town, they will see me here,” she said. “They always have my number and I’ll always be around to support Bertie High School.”

MERRY HILL – If it’s May, it must be time for Lawrence Academy’s baseball team to head to their ‘second... read more