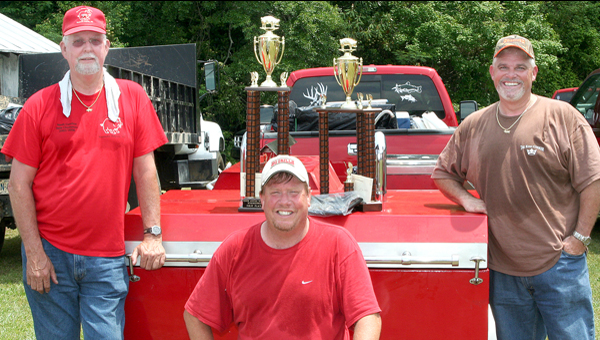 MURFREESBORO — Despite the threat of inclement weather, visitors still flocked to the Roanoke-Chowan Pork Fest.

Festival-goers browsed vendor tents, listened to music and perused “Pork Alley,” where 17 cooking teams from North Carolina and Virginia went head to head in both showmanship and onsite competition. The event was judged by Charles Chestnut, Jerry Hart and Charlie Martin, all certified judges with the North Carolina Pork Council.

Plates were served during the event’s barbecue meal, which is chopped pork collected from the grilled pigs. The pork is dowsed in Murfreesboro’s “secret sauce.”

According to Pork Fest Committee member Colon Ballance the attendance number is a little down from last year.

“I don’t know if it was the threat of bad weather or the economy,” he said.

Attendance numbers didn’t put a damper on the festivities, bringing out the regulars and even a few new faces.

Keith Tennessee, along with his wife, Marilyn, and daughter Faith, of Drewryville, Va. made their way to the Pork Fest on the suggestion of a local citizen.

“I’ve heard about it for a couple of years,” he said. “We were invited by Steve Fowler.”

Mr. Tennessee, a self-proclaimed barbecue connoisseur, said he enjoyed watching the judges sample the variety of pigs and after experiencing the Pork Fest he is thinking about competing next year.

“I’ve got a few ideas of my own,” he said. “They’ve done a pretty good job, but I think I have something for them.

Head Chef Joe Peterson of Roanoke Rapids and his team Down Home Cookers took the top spot for the Culinary Competition.

Peterson has been in competition since 1992 and his most recent win at the event marks the third such one at the Roanoke-Chowan Pork Festival. This year, Peterson has also been successful in pork fests in Edenton and Kinston.

After nearly 20 years in pork competitions, Peterson said the key a successful competition is making those judges happy.

“I cook the pig the same way, but you get different judges—you always have to satisfy the judges,” he said.

Perhaps part of both Peterson’s and Burke’s individual success was an assistant cook, Ernest Twisdale o Roanoke Rapids, who helped both teams.

“I’m just glad to help these guys,” he said.

Other winners of the Culinary Competition included: