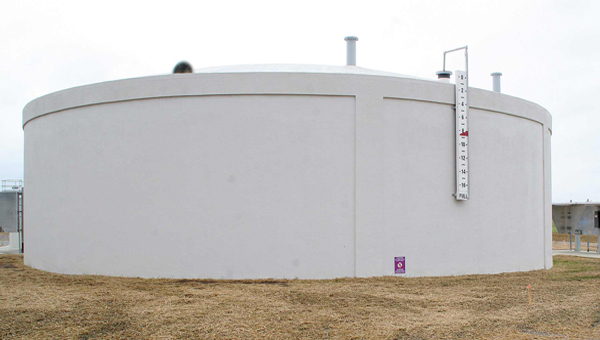 This collection tank at the Ahoskie Wastewater Treatment Plant is slowly being filled with reusable effluent which will eventually be used for irrigation purposes. Staff Photo by Cal Bryant

Such is the case in Ahoskie where town officials have shifted their original focus of a portion of the Wastewater Treatment Plant (WWTP) project.

At the outset of that $17.87 million project, the town received a $3 million grant from the Clean Water Management Trust Fund for the construction of a reclaimed water system. That system employs enhanced UV disinfection and chlorine disinfection in order to transform wastewater for industrial re-use purposes.

At the time the grant was received two years ago, Ahoskie officials had entered into a Letter of Intent with Hertford Renewable Energy (HRE), an electrical co-generation station planned to be constructed near Millennium. The town had plans to construct a reclaimed force main between Ahoskie’s WWTP and HRE where the industry would use the treated water for cooling purposes at their facility.

However, just over one year ago, HRE withdrew its option to purchase the property, thus ending its intent to use Ahoskie’s reclaimed water.

Meanwhile, the engineering firm representing the town was moving forward with that project and had expended $662,202.

Now with a remaining balance of $2.28 million from the grant, Ahoskie officials are opting for “Plan B” – using the highly-treated wastewater for irrigation purposes. That remaining grant money will be supplemented by $291,000 in funds from the State and Tribal Assistance Grant.

According to the new plan, the treated wastewater will be moved through 22,500 feet of piping from the town’s WWTP, located on the Johnny Mitchell Road, and provide irrigation at several potential locations, to include Ahoskie’s new recreational complex, the Ahoskie Police Station, Roanoke-Chowan Hospital, Hertford County High School and Ahoskie Elementary School. A farming operation located near the WWTP is also a potential customer for the treated wastewater for irrigation purposes.

In addition to the existing re-use storage unit constructed at the recently expanded WWTP, town officials may look to lease or purchase the overhead water storage tank located at the old Carolina Billets plant on Johnny Mitchell Road.

According to the project schedule of this new plan, the preliminary study phase is expected to be completed by November of this year and develop construction documents by February, 2012. Following the bidding process, construction is scheduled to begin in June of next year, ending in December.

Meanwhile, Ahoskie’s new, state-of-the-art WWTP is operational, but not yet up to full capacity. It began treating wastewater last week.