Smoke from a massive wildfire that ignited May 5 within the Alligator River National Wildlife Refuge is expected to drift northward today (Friday).

The North Carolina Division of Air Quality has issued a Code Orange air quality alert for northeast North Carolina. The only local area within that alert area is Gates County. The alert remains in effect until midnight. 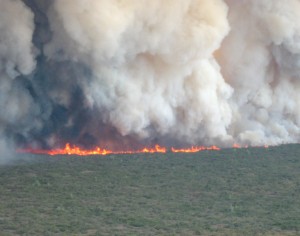 A line of fire slices across a portion of the Pains Bay at the Alligator River National Wildlife Refuge in Dare County. Smoke from that blaze is expected to drift into a portion of the Roanoke-Chowan area today (Friday). Photo courtesy of Donnie Harris of the U.S. Fish and Wildlife Service

and/or heart ailments, older adults and children should reduce prolonged or heavy outdoor exertion. Concentrations of fine particulates within the smoke may approach or exceed unhealthy standards.

Earlier in the week, smoke from the wildfire was noted in Bertie County.

According to an update on the Pains Bay Fire at the Alligator River National Wildlife Refuge in Dare County, the blaze is 55 percent contained. To date it has scorched 25,678 acres.

Located 19 miles south of Mann’s Harbor, the fire has closed US 264 between Engelhard in Hyde County and Stumpy Point in Dare County.

The Pains Bay Fire continued to spot over onto the west side of Pamlico Road on the southern perimeter of the fire.   In an on-going effort to keep that section of the fire from crossing US Highway 264 to the north, firefighters successfully initiated a 1,758 acre burn-out along the south side of U.S. 264. Operations were supported by two helicopters.

Firefighters continue burn-out operations to secure containment lines on the north end of the fire. In some areas, the wildfire is smoldering and burning in the deep organic soils (peat.) Plans are to irrigate these areas near the containment lines to better secure the fire perimeter.

Smoke patterns will change beginning Friday and continue through the weekend. A high pressure system will move off shore and be replaced by a low pressure system approaching from the west. Winds will shift to southerly. Inland conditions should improve while the northern Outer Banks and communities near the fire will experience more smoke.

The cause of the fire is under investigation.