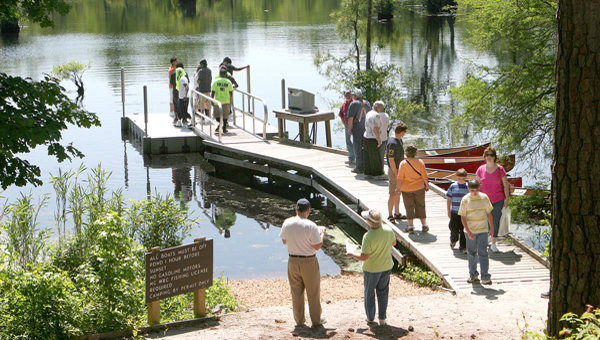 Those who gathered for the 200th anniversary celebration of the Merchants Millpond took time to stroll down to the landing. Many had the opportunity to either stand on the dock and look out over the beautiful millpond or to take canoe trips. Staff Photo by Thadd White

GATESVILLE – Two centuries have passed and it is still a majestic reminder of all that is right with nature.

Saturday, the Merchants Millpond State Park in Gates County celebrated 200 years of existence with a day that brought out nearly 1,000 people.

“We want to educate people on the Millpond and its resources,” said Park Ranger Jay Greenwood. “Everyone seems to be enjoying themselves.”

Saturday’s calendar was full for those in attendance with a Nature Walk starting at 10 a.m. and followed by canoe trips in the millpond.

There was also live music provided by Bobby Plough and a presentation by the Master Gardeners as well as a demonstration on recycling and composting.

One of the highlights of the day was a children’s art contest which allowed youngsters to use chalk and draw on the sidewalk outside the Visitors Center. There were an abundance of children who participated in the contest.

“The children’s art contest had a lot of interest,” Greenwood said. “Children were busy working on their projects.”

The Center was also open with people throughout Gates County and the surrounding region coming in to view the exhibits that are on display. Those exhibits include two provided by local families.

The Eure family has loaned a dugout canoe that is approximately 150 years old to be displayed in the lobby of the building while the Umphlett Family has provided Indian artifacts that have been collected in the county for many years.

Greenwood said the Millpond appreciated the displays and they seemed to be a hit with those coming in to view exhibits.

In addition to everything offered by the Millpond, merchants and other organizations from Gates County set up displays around the Visitors Center providing information about happenings in Gates County.

The North Carolina Cooperative Extension had a booth celebrating 100 years of existence.

Visitors also took canoe trips during the afternoon and were able to take advantage of the walking trails provided by the Millpond.

The Merchants Millpond State Park is an enchanted forest of primitive species of fish that have been relatively unchanged for many years. It also features Cypress trees with massive trunks and Spanish moss.

Greenwood said approximately 200,000 – 240,000 people visit the park each year with the bulk of that number coming during the spring and fall.

“The spring and fall are very busy paddling and camping times for us,” he said. “The Millpond is a popular destination, especially during those times.”

He said there were nearly 3,300 acres in the state park with four campgrounds and 12 miles of hiking trails throughout the facility. There are also 20 miles of paddling trails.

The Visitors Center at the Millpond was opened for public use two years ago.

“Everything went well and it’s been a beautiful day,” Greenwood said Saturday. “Everyone seems to be thrilled to be here and everyone has been very excited.”

The Park Ranger said he hoped to see the event become an annual occurrence.

Larabee to play at Asbury