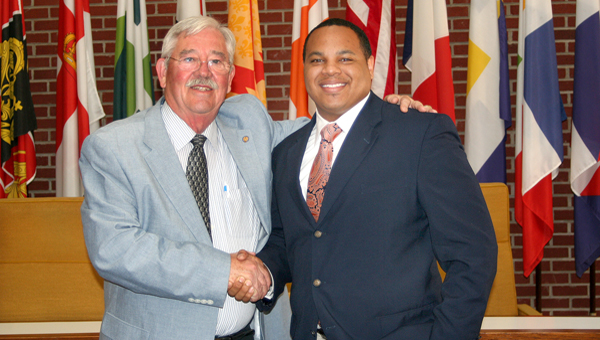 Last week, the Murfreesboro Town Council offered the Randleman native an employment agreement for the position, which  Holland has accepted and signed.

On Monday, Holland was in attendance for the council’s regular meeting and seemed excited to take on his new duties, which he will officially assume on May 30.

“I’ve met with the department heads here, the council and even just being around town I’m really impressed with the people,” he said. “I’m just happy to be a part of the team.”

During the meeting, Mayor John Hinton announced the hiring of Holland along with Northampton County native Carolyn Brown, who is the accounts payable coordinator at Chowan University, as Town Clerk.

“It’s been a long time coming and I’m excited to have Brandon on board,” he said in a later interview. “He comes well qualified and I think he will be an excellent asset to Murfreesboro.”

Holland comes to town with education and experience in public management. He started his education career at North Carolina A&T University, where he was on the football team. After a year he transferred to Appalachian State University, a school known for educating one-third of town/city managers in the state. There, he graduated with a degree in public management and a minor in communications in December 2008.  It was his junior year in college that Holland knew he wanted to be a manager.

“I wanted to do this because of the variety. I didn’t want to do just planning, just law enforcement, I wanted a little bit of everything,” he said. “No day is the same on this job and that’s what I liked about it.”

Soon after, Holland began to work on his master’s degree, which he earned this past December. Holland also gained experience through internships – two with his home town of Randleman in the City Manager’s Office and another with Kannapolis in the City Manager’s Office and Public Works. In January, Holland was hired as assistant city manager in Randleman.

Just after applying for the job in Murfreesboro, Holland, by chance, met Interim Murfreesboro Town Administrator Richard Hicks at the City Managers’ Conference in Raleigh.

“He told me that he was going to be Interim here and I told him I had already submitted an application here,” Holland said.

When the position was eventually offered to him, Holland said it was the hometown feel to Murfreesboro that made him sign the dotted line.

“The bottom line is the people,” he said. “I’ve met people, people walking down the street don’t even know who you are, throw up their hand and wave at you. Those are the types of things that make you feel like you’re at home.”

Holland said he is looking forward to working with the town’s staff and meeting budget challenges head on.

“(My goal is to) just leave it better than I found it,” he said. “I hear about the budget challenges and the issues of the past and I just want make it easy for the next guy to get here.”

As for the controversy that has surrounded the Murfreesboro Administrator’s position within the last months, Holland is interested in creating his own impression on the town’s citizens as well as town officials.

He concluded, “I think that working together with the department heads and the wishes of the council and keeping everyone informed with the same information and being honest about it, that confidence will be restored.”

Did you know that studies have shown than two of every three illiterate people in the world are women? Really,... read more