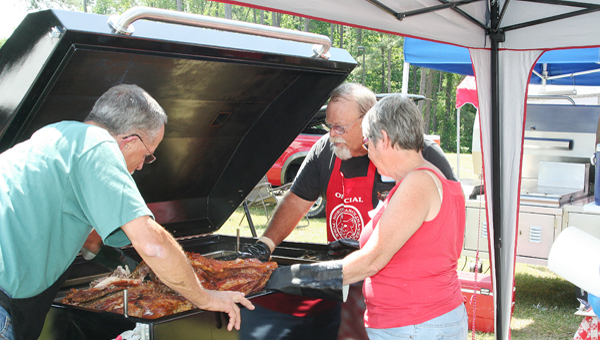 NC Pork Council judges are shown here performing their tasks at the 2010 R-C Pork Fest in Murfreesboro. This year’s event is scheduled for Friday and Saturday, May 13-14, on the grounds of the Brady C. Jefcoat Museum in Murfreesboro. File Photo by Amanda VanDerBroek

MURFREESBORO – The tenth annual Roanoke-Chowan Pork Fest barbecue cook-off will continue an expanded schedule beginning Friday night, May 13.  South Moon Old Time Band will play from 6 to 7:30 p.m. Friday, followed by showmanship judging of the cooking teams at 8 p.m.  The public is invited to attend the concert and the judging free of charge.

Admission for the Saturday event is $10. The ticket price includes a barbecue meal, a tour of the Museum, live entertainment, and a chance to observe the cooking competitors.  There will also be arts and crafts and antique vendors, dozens of antique cars on display and activities for the kids.

The Pork Fest event supports the Brady C. Jefcoat Museum of Americana in Murfreesboro and is held on the Museum grounds.

On Saturday, the festivities start at 8:30 a.m. and continue until 4 p.m.  Live music will be provided by the Moonshine Band from 10 a.m. until 3 p.m.

Ticket holders are invited to stroll down “Pork Alley” and watch the competitors work from 8:30 until 11 a.m.  Tours of the Brady C. Jefcoat Museum of Americana will be conducted from 11 a.m. until 2 p.m.  More than 10,000 items are on display in more than 17,000 square feet in the historic Murfreesboro High School Building.  In addition to Mr. Jefcoat’s collection, the tour will include the Bea and Howard Simmons Collection in the old Home Economics Building and Dickey Hoggard’s Native American exhibit in the old Agriculture Building.

When the cooking is done and the judging underway, the pork will be chopped, combined and topped with Murfreesboro’s secret sauce, then offered up with cole slaw, potatoes and hush puppies.  The savory barbecue meal will be served from 12 noon until 3 p.m. and nobody leaves hungry.

Advance tickets are available at the Jefcoat Museum on weekends, at the Murfreesboro Historical Association office in the Roberts-Vaughan Village Center from Monday through Thursday, at the NC License Bureau and Hall Auto Parts in Murfreesboro, at Wholesale Cash and Carry in Ahoskie, Woodland Super Market in Woodland, and at the Nottoway House in Courtland, VA.  Tickets are also available at the gate.

Tickets can be purchased through the mail by sending a check or money order payable to “Murfreesboro Historical Association” to 512 Woodridge Drive, Murfreesboro, NC  27855.

Pork Fest is a fun-filled, family-friendly, drug-free and alcohol-free event.

The Friends of Bertie – Rescind the Raise Committee has joined with Bertie County in relief efforts this past week... read more