Canoe reveals glimpse of past history 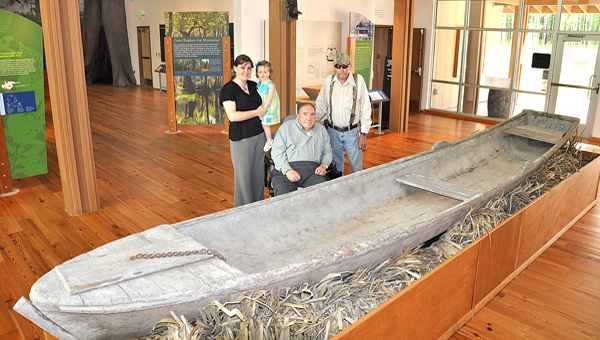 This 19 ½ foot dugout canoe, on display at Merchants Millpond State Park, is on loan from the Eure family, descendants of the Crawford Brothers who built the vessel. Four generations of that family are pictured here: James Alton Eure Sr., James Alton Eure Jr., Sara P. Turner and Josie Turner.

GATESVILLE – Long before the construction of public roadways, travel in and out of Gates County was performed in one of two ways – either by horse over roughly carved out paths or by water.

It’s that latter mode of travel which promises to spark the interest of those attending Saturday’s (May 7) celebration of the 200th anniversary of Merchants Millpond State Park. On display at the Millpond’s Visitors Center is a cypress dugout canoe, built seven generations ago by descendants of the Eure family of Gates County.

James Alton Eure Sr. recalls that this 19 and one-half foot canoe was constructed in 1800’s by his grandfather and other Hall men.  The vessel is an artifact that reveals the importance of the rivers and creeks in the lives of Gates County natives before the roads in and out of the county were built.

The late F. Roy Johnson, a well-respected author and publisher in Murfreesboro, detailed the importance of water travel in one chapter of his 1965 book – “Tales from Old Carolina.” The following is an excerpt from that book, one entitled – “Manner of Nineteenth Century Dugout Building.”

“Some of the craftsmen who built dugouts survived until a few years ago.  One was John Crawford, who told of how he and three other men built a 19 ½ foot-long boat.

John’s brother, Henry, planned for twenty feet, but the large cypress felled in Sarem Creek Swamp had a windshake which necessitated a six-inch reduction.  Two skilled woodsmen, Rufus Harrell and Frank Landing, helped the two brothers. The hulk was shaped with axes and drawing knives, a task which required both a right-handed and left-handed man to draw the curves on both sides.

“A dozen or more augur holes were then cut into the hulk—about the sides and bottom.  The men took coopers adz and round sleeve to dig out the smooth down the inside to the tips of the pegs which had been inserted into the augur holes as thickness gauges.   Permanent pegs then closed the holes.   A narrow strip of gunneling was affixed to prevent the shell from splitting where the wood had been cut across the grain.

“It was another task to move the boat one-half mile through the swamp to the creek.  A northeast storm sent both the Chowan’s tides and the Crawford brothers and two strong men, George Williams and Richard Green, into the swamp—also a quart of apple brandy.  The men were drammed with the brandy, and the dugout moved slowly through the muck and across the water pools to the creek.   More drams—the boat was on the nine-mile journey down the creek and up the Chowan River to mooring at Ray’s Beach.

“A gale swept the surface of the river into the sea of whitecaps.  The ambitious oarsmen sent the boat’s bow plowing through the waves – until instructed to slow down and permit the long curvaceous craft to ascend and descend to the symphony of the water.

“Hall men were accustomed to travel great distances on their dugouts.  Few were willing to pay passage on the river steamers for the sixty-mile round-trip to Franklin, Virginia, and the seventy-five-mile round – trip to Edenton.  Two good oarsmen, leaving early in the morning, could attend to their business and be home by early night.

“Hall natives still remember adventuring with their fathers upon the river – the thrill of passing steamers, with strange faces at their rails,  ‘plowing out the river’ and cradling their small boats upon the wave rolling shoreward.”

The historic millpond, now a North Carolina State Park, will celebrate its 200th birthday during a free event open to the public on Saturday, May 7. The celebration is scheduled from 10 a.m. until 3 p.m.

The day’s activities include live music, canoe and hiking trips, kid’s art contest, a bounce house, health screenings, the unveiling of two new cultural exhibits and many more activities for the whole family.  The celebration will also include many local vendors and food.

Merchants Millpond State Park is located at 176 Millpond Road off US 158 east of Gatesville.

We shouldn’t have to ask

To the Editor: After this year’s discovery of Zee Lamb’s 2009 untimely raise, I asked Commissioner Wallace Perry why he... read more