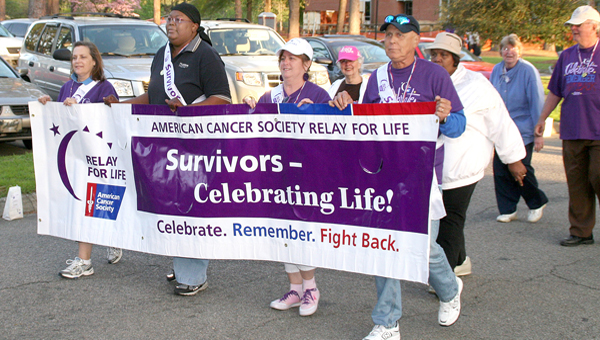 As is tradition at Hertford-Gates Relay for Life, cancer survivors walk the ceremonial first lap. The ones featured here led that group by carrying the American Cancer Society’s “Relay” banner. Staff Photo by Cal Bryant

MURFREESBORO – It’s only a number.

While the 2011 Hertford-Gates Relay for Life fell short of its goal, the effort to help eradicate cancer remained at an all-time high.

Nearly 50 teams took part in the annual event, transforming Chowan University’s Squirrel Park into a mini-city over the course of 24 hours on Friday, April 15 through Saturday, April 16.

Those hearty souls braved a bout of cool weather and a steady, sometimes stiff, wind to generate funds for cancer research and education.

By the time the closing ceremonies rolled around early Saturday afternoon, the event had generated $207,772.56 That figure was short of this year’s goal of $256,300.

“We’ve got a little ways to go to reach our goal this year, but all that is is just a number, a number written down on a piece of paper,” said Rochelle Harrell, co-chairperson of this year’s event. “But you need to know that every dime, every dollar, every penny that you have raised has helped save someone’s life and helped to allow someone to celebrate another birthday.

“We will not leave here disappointed because we did not meet our goal; let us know and feel good about what we did and what we accomplished,” Harrell concluded.

“Yes, it makes you wonder if this is a fight that we can win, but you put that thought aside because we know it’s one we can win through events such as Relay for Life,” Nowell said.

The 2011 Hertford-Gates Relay for Life paid tribute to the 376 cancer survivors registered for the event, 200 of which were on hand for Friday night’s opening ceremonies and traditional first lap around Squirrel Park. Also saluted were the caregivers of those cancer survivors.

Event organizers reminded the public that the 2011 Hertford-Gates Relay for Life does not officially end until August. Donations are accepted up until that time.

The top awards handed out on Saturday during the closing ceremonies were given to the following teams and/or individuals:

Through the eyes of a child

This group of Northeast Academy students conducted a clothing and toy drive for the young victims of the Bertie County... read more