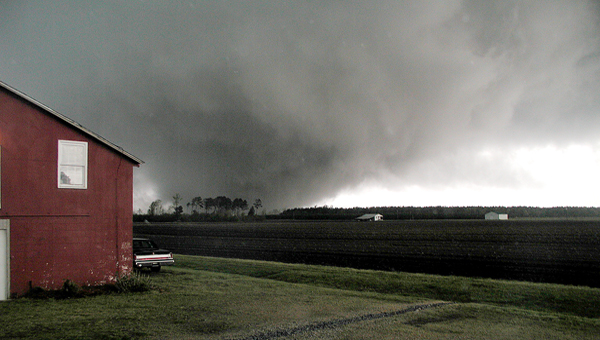 With Saturday’s tornado bearing down on his Bertie County home, Richard Burkett of 114 Kitchen Spruill Road off NC 42 near Colerain grabbed his camera and snapped this hurried photo.

COLERAIN – With a massive tornado bearing down on your property, possibly posing a threat to human life, would you dare to grab a camera and snap a photo before dashing for cover?

For the husband and wife team of Richard and Jean Burkett, their decision to do so has forever recorded Bertie County history.

The Burketts, who reside at 114 Kitchen Spruill Road, a dirt path located off NC 42 just west of Colerain, had just finished eating dinner on the evening of Saturday, April 16.

“I was in the kitchen, doing the dishes while listening to the TV news when they said a tornado had touched down in Askewville,” said Mrs. Burkett. “They never mentioned anything about Colerain.”

The latter changed in a hurry.

“Before I could finish the dishes, I noticed how dark the sky was getting,” she recalled. “I looked out the back window and there it was …. a big, big tornado.”

She hollered at her husband to look.

“He grabbed the camera; I held the storm door open while he snapped the photo and then we ran and got in the closet underneath a stairwell,” Mrs. Burkett said. “Ten seconds later, the whole house started shaking. It felt like an eternity before it stopped, but it was more along the lines of about one minute.”

The Burketts exited their place of safety to find that the tornado has destroyed a two-story barn.

“We looked out at the highway (NC 42) and saw all the devastation,” she said. “That whole neighborhood was gone. We later learned that three of our friends had died there.”

She said that other than losing the barn, the only other damage was shingles and siding off their house.

And handy with a camera as evident on page 1A of today’s edition.