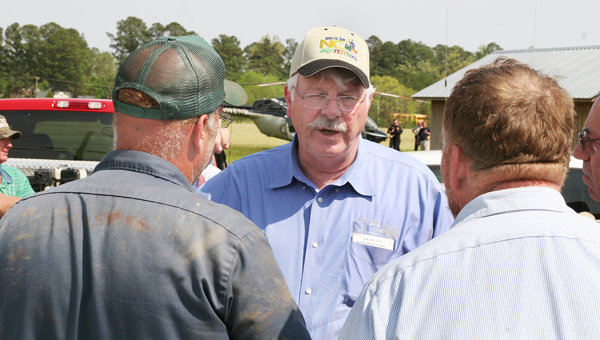 COLERAIN – As a former farmer, Steve Troxler said his eyes filled with tears upon witnessing the massive amount of damage to agricultural operations in North Carolina caused by Saturday’s outbreak of multiple tornados in the Tar Heel State.

Troxler, the state’s Commissioner of Agriculture, viewed that damage from the air and on the ground Tuesday during visits to Lee, Johnston and Bertie counties.

After his helicopter landed at Brown Peanut Company in Colerain, Troxler shared what he witnessed with a group of Bertie and Hertford County farmers as well as local agriculture officials.

“We decided to fly in this helicopter so we could follow the path of these tornados and see from the air what kind of agricultural damage we have and I’ve seen some unbelievable things today,” said Troxler. “Where those tornados went, you can believe me when I say that damage is there … you’ve seen it right here in Bertie County. There’s nothing left in some areas. I saw multi-million dollar farming operations turned completely upside down. There’s very little left to salvage. It chokes you up inside knowing what it took, the sweat and the effort, to get that operation to the point it was at before the tornado struck.”

He continued, “I’ve seen this disaster on the TV news; I’ve seen the pictures of it, but it really doesn’t sink in until you actually see it first hand. After seeing it, I can honestly say that I’m amazed that more lives weren’t lost. This could have been an event where we lost hundreds and hundreds of lives. How we didn’t is only by the grace of God.”

Troxler learned of miracles as well.

“I saw one operation where they were five people hunkered down (from the storm) in a little old office in a corner of a shop and that was the only place left standing on the whole farm,” he said. “They made it out without a scratch.”

The reason behind Troxler’s visit wasn’t to share stories, but rather information on what the state can do to help local farmers.

At the very least, Troxler is hoping that some sort of crop disaster assistance will come out of Washington, DC. He said he hopes that assistance will include specialty crops, particularly strawberries which are currently being harvested in the local area.

The Commissioner added that the state Department of Agriculture was in the process of setting up special telephone lines designed to assist farmers in purchasing equipment to replace what was destroyed or damaged.

“We’ve got to pick ourselves up, dust ourselves off and go on,” he concluded. “As the people who put food on America’s tables and the world, we have no other choice. None of us could stop this storm nor do we have the power to change its course. Now we have to deal with what we have left.”

It was learned on Tuesday that the North Carolina Department of Correction would provide prison inmates to help farmers clear their fields of debris left by the tornados. Six such teams (four from Tyrrell County and two from Pasquotank County) arrived in Bertie County.

The debris clean-up will be orchestrated through FSA (Farm Service Agency) and its Emergency Conservation Program. The only requirement for local farmers is to sign a liability form that allows the prison labor to come onto their property. The prison crews are expected to be in the county until Friday, perhaps longer if needed.

Farmers can supply trailers if desired to help expedite the debris collection process.

He said there were three programs in place that would help farmers and that the local board would move quickly to aid those in need.

The first program Martin discussed was the Emergency Conservation Program.  He said it would help farmers get all the debris removed from their field.

“It’s already been approved, we just have to get the word out,” he said.

Martin was due to convene an emergency meeting of the State FSA Emergency Board when he returned to Raleigh.

“We had a hard time getting us all together, so that’s where we could meet,” she mused.

The group discussed the conservation program as well as the Tree Assistance Program and the Emergency Assistance for Livestock program.

The latter program will allow for the replacement of any animals that were killed due to the tornado including horses, pigs, cows and chickens among others.

The former does the same for trees planted for conservation efforts.

Current estimates are that $1.5 million in damages were done by the tornadoes, mostly in equipments, barns and shelters.

A total of 20 farmers and 150 farms were hit and the damage was done to fields that do or will contain cotton, corn, peanuts, sage, wheat and tobacco.

Only the wheat crop is believed to be endangered at the moment.

Many of the board members had already been to tour the devastated areas.

Alston had a good example.

“It looks like a half a mile or three-quarter mile Katrina,” he said.

Mizelle said it was “sad.”

“It’s just sad and you can shed a tear quickly,” she said. “From a farmer’s stand point, you hate to see the season get started like this.”

The local board said what they could do to help was to get the word out about the program.

“They can call now and let us know what they need and we’ll let them know how we can help,” Mizelle said.

“The good thing is the local board can adapt somewhat to the situation,” he said. “That takes away some of the red tape. The fact is farmer’s can’t wait six months or a year for help.”

AHOSKIE – The Ridgecroft School softball team shook off a pair of losses to end last week and opened their... read more