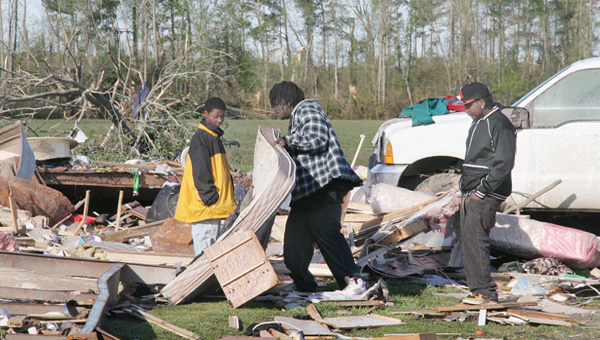 The clean-up process begins on Morris Ford Road near the Rosemead community in Bertie County. Staff Photo by Cal Bryant

Special to the News Herald

COLERAIN – Morgan Barfield tied an American flag to a battered tree in front of her grandmother’s demolished house near here Monday morning along a stretch of N.C. Highway 42 West.

Barfield wanted the flag to remind survivors that many people were left behind to cope with Saturday’s fatal tornado outbreak.

But her grandmother wasn’t there to see that red, white and blue reminder.

Barfield’s grandmother, Helen White, was killed along with the young woman’s aunt and uncle as a massive tornado swept through this community.

“It’s hard,” said Barfield, taking a break from sorting through the remnants of her grandmother’s home.

“We just lost a cousin on the other side of the family Monday,” she shared. “We’re staying together, close as a family, and the community and everybody’s behind us.”

Family and community support likely will be key in the coming days as the recovery from the weekend’s record tornado outbreak continues.

Bertie County was especially hard hit, with 11 fatalities recorded, three of them just steps away from the pile of rubble that was White’s home.

Rebuilding will occur, residents said; but first, there must be funerals, and a search for the relics of lost lives.

Barfield isn’t sure when the funeral for her family members will take place.

“We can’t even think about it right now, to be honest,” she said. “We’re all still in so much shock and just have so much other stuff on our mind to get through first.”

Local, state and national media swamped the shoulder of the highway a stone’s throw away.

Crews from electric companies worked to put up new utility poles. The old poles had been broken and tossed out into fields.

Not far from this scene was Marshall Harrell, a Gates County resident who had his hands full sifting through the debris that had been his parents’ house.

His parents, Ethel and Raymond Cale, weren’t home when the tornado struck.

Harrell’s parents, both in their 70s, now have nothing to come home to. The couple’s house was gutted by the storm’s incredible winds.

His mother is a meticulous housekeeper, he related. Now the interior of her once-immaculate home is crusted over with mud. The front window has been blown out, frame and all, and some of the roof has been sheared away.

“I think we’re going to do pretty good,” Harrell said. “I mean, they lost everything, OK. But they’re lucky. We can get in the house and salvage stuff. The folks over here, there’s three (that) lost their lives right next door. They can’t salvage nothing.”

Harrell already has removed his parents’ clothes and what pictures he and his two helpers could find.

And he doesn’t mind all the media poking around – not so much.

“This stuff needs to be aired because when there’s a tornado warning people say, ‘It’s not going to happen to me,’” Harrell concluded. “Well, it can.”

Not far away, Glenn Collins, a contractor from Edenton, had turned up to help an old customer with an estimate to repair significant damage to a house.

Asked whether he expects a lot of repair calls this week, Collins replied, “I’m not a storm chaser.”

He probably will get some calls from people whose homes were affected by the storms, he acknowledged, but: “I’d rather not have it if it has to be like this, even with the economy like it is and struggling to survive. If I gotta make money I’d rather not make it like this.”

Across the Bertie County line in Hertford County, Loria Williams, county manager, got an up-close look at the damage.

Some 18 homes in the county had major damage, while 36 had minor damage, according to Chris Smith, emergency management coordinator.

“Just to see the devastation firsthand, it hits you very, very hard,” Williams said. “But we’re fortunate. We didn’t have any fatalities.”

The deadliest storm in Bertie’s history has left a trail of destruction through this rural county where 11 fatalities have... read more