‘It just breaks your heart’ 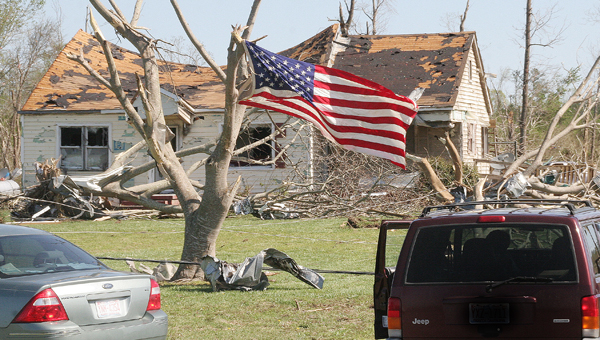 An American Flag flies proudly from a tornado-ravaged tree in front of this damaged home on NC 42 west of Colerain. Staff Photo by Cal Bryant

COLERAIN – Milton Felton has served with the Colerain Volunteer Fire Department “as long as I can remember.”

What he doesn’t remember is a tornado that carved up his beloved Bertie County such as the one that blew through late Saturday afternoon.

“We’ve had some tornados in our part of the county in the past, but nothing like this,” Felton said as he surveyed one area of major damage on NC 42 west of Colerain. “We’ve lost lives here; people have lost families here….it just breaks your heart.”

As of late Sunday afternoon, Bertie’s death toll stands at 11 from Saturday’s tornado, one that apparently spawned near Askewville and sliced a path of destruction northeast towards the Colerain area. In its path were homes that dotted the countryside along Glover’s Crossroads, Morris Ford Road, Buncombe Road, Nowell Farm Road, West Askewville Street, Wakelon Road and Perry’s School Road.

“I was standing in my front yard when I saw the tornado pass through a field and then enter the woods in front of my house,” said Brenda Adams of Wakelon Road, whose husband, John, is a member of the Colerain Volunteer Fire Department.

John Adams, Felton and other Colerain firemen were soon thereafter dispatched to the hardest hit areas. That included Glover’s Crossroads, an area no stranger to previous devastation from tornados. There, two victims were found deceased underneath a home.

“They were actually inside a mobile home located behind a stick-built home,” Felton said. “We assume the tornado must have sucked them out of the trailer and underneath the other house.”

The trailer was tossed into a nearby woods. Reports of two survivors in that home are unconfirmed.

Meanwhile, lives were lost on Morris Ford Road near the community of Rosemead, also in the Colerain area. Two were reportedly killed in a group care home. Another victim, first reported as missing, was discovered dead in a woods across the road from her demolished home.

Another couple managed to avoid serious injury, surviving the storm’s wrath by ducking inside an interior closet and riding out the storm, according to their son. The front section of the home was totally destroyed and the roof was ripped off.

Fatalities from the storm were also reported along a stretch of NC 42 west of Colerain, on Harrell Road and in the Elm Grove community.

The number of homes destroyed or damaged from the tornado is not yet known. Bertie County officials were still in the process of assessing the damage on Sunday. Rickey Freeman, the county’s Emergency Management Coordinator, said that effort is expected to continue through Monday.

All of the county’s emergency response agencies worked the damaged areas. On Saturday night they were faced with the tough task of have to cut their way through downed trees on local roadways to gain access to the hardest hit areas. Downed power lines, some believed to be still live, also proved as a deterrent to providing quick aid to the storm’s numerous victims.

Assistance was provided by emergency responders from Chowan, Gates, Hertford and Northampton counties.

Bertie County Public Schools will be closed on Monday. It’s an optional work day for teachers.