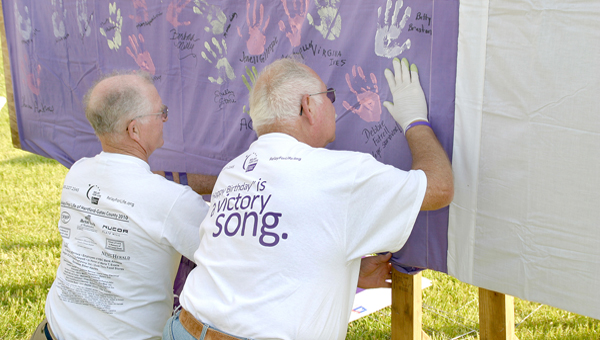 Two cancer survivors leave their names and handprints on a board at the 2010 Hertford-Gates Relay for Life. This year’s event begins at 5 p.m. on Friday at Chowan University. File Photo by Cal Bryant

MURFREESBORO – They come from diverse backgrounds – young and old; black and white; male and female; rich and poor.

The difference in age, color of skin, gender and financial status is of no consequence to the disease known as cancer. It can strike anyone at anytime, but thanks to key advancements in medical research as well as an effort to better educate the general public on this disease there is a noted decline in the number of cancer-related illnesses and deaths.

That is due in part to events such as Relay for Life, a celebration, so to speak, of those who have fought this disease and won while taking the time to remember family members and friends that have lost their battle against cancer.

For the 11th consecutive year, citizens of Hertford and Gates counties, along with invited guests from other areas, will raise the American Cancer Society’s flag and join hands in this ongoing fight. The Hertford-Gates Relay for Life gets underway tomorrow (Friday) at 5 p.m. (opening ceremonies are scheduled for 6 p.m.) in Squirrel Park on the campus of Chowan University in Murfreesboro.

Nearly 50 teams will take part in the event, which runs non-stop through 1 p.m. on Saturday. Those team members have spent months engaged in fundraising activities for the American Cancer Society. Most all will have on-site fundraisers, as well as a wide assortment of food for sale, throughout this year’s event.

“A different path led each of us to Relay; something sparked a fire inside of each of us to begin the fight,” said Rochelle Harrell, co-chair of the 2011 Hertford-Gates Relay. “But it is that fire in all of us that brings us together at Relay each year as a community dedicated to ending cancer. We do it in honor of all the cancer survivors, and in memory of all cancer victims, and we do it for the hope of a future without cancer.”

Harrell, along with co-chair Leigh Nowell, invites the public to come out and share in this emotion-filled occasion.

One of the most moving events will get underway shortly past 9 p.m. on Friday where the huge crowd will fall silent with the start of the annual luminary ceremony. There, names of cancer survivors and victims are shown on a big screen at the main stage. In the background, thousands of luminary bags plus several torches honoring or memorializing cancer patients will line the walkway and produce a soft, comforting glow that will later help light the way for those taking part in the event.

“It warms our hearts to see the support from our sponsors, community and the citizens helping to raise funds and awareness in the fight against cancer,” Nowell stated. “The Hertford-Gates Relay brings people together, builds friendships and helps us find the support and comfort from others in the same situation as ourselves. We are saddened by each others sorrows and we celebrate each others successes.”

Among Saturday’s highlights are the annual Kid’s Walk, including a Kid’s Talent Show, and appearances from Brittany York, Miss North Carolina USA for 2011, and Ronald McDonald.