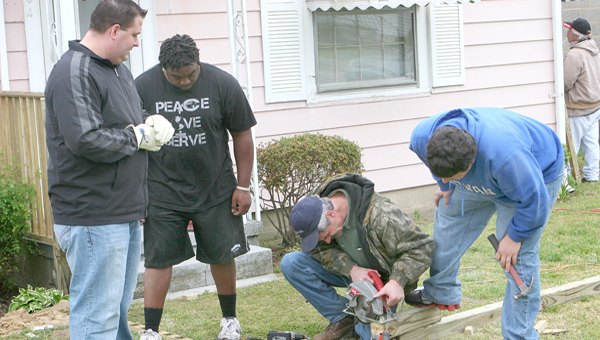 As part of Hope Day, members of several local churches and organizations helped those in Murfreesboro with needs. Here, a group of the volunteers work on a hand rail at a home in town where they also repaired a door. Staff Photo by Thadd White

That is the goal of the ministry of several local Christian organizations, including a handful of churches, which organized and carried out Hope Day on Saturday in Murfreesboro.

“There were a couple of ideas behind Hope Day,” said the Rev. Dr. Lee Canipe, pastor of Murfreesboro Baptist Church. “The first was that it is an opportunity for Christians in Murfreesboro to cooperate and work together in Jesus’ name, which is what we’re supposed to be doing.

“The other reason is for people outside the church to have an opportunity to see our faith in action,” he added. “It is a witness to see we are actively trying to put our faith in motion.”

Those projects included several home repairs. Volunteers repaired a hole in the floor of one home, built hand rails and fixed an access door at another and cleaned up debris from several yards.

In addition, there was a team who picked up litter on Main Street in Murfreesboro.

Three teams went to Riverview Elementary School where they tackled a variety of projects. They included shoveling sand onto the playground and landscaping several interior courtyards.

In addition, one team worked on the continued clearing of the nature trail and another built raised planting beds for a school gardening project.

The organizational team for Hope Day began meeting in December of last year and started gathering ideas for projects to be done in the community.

“Some of it was simply by word of mouth as we asked in our churches if anyone knew of projects that should be done,” Dr. Canipe said. “We also went to CADA (Choanoke Area Development Association) for some referrals.”

Dr. Canipe said he was pleased with the success of the event.

“As a pastor, it is always encouraging to see members of my church and other churches out there making a difference – trying to witness by what they do as well as what they say,” he said. “I was pleased. Having said that, there’s still room for growth.”

Dr. Canipe said the group of churches and, hopefully others, would work together again next year to do the same type of event. Anyone interested in becoming involved should call Murfreesboro Baptist Church at 398-3613.

WINDSOR – The decision to hire a new auditor caused a split among members of the Bertie County Board of... read more