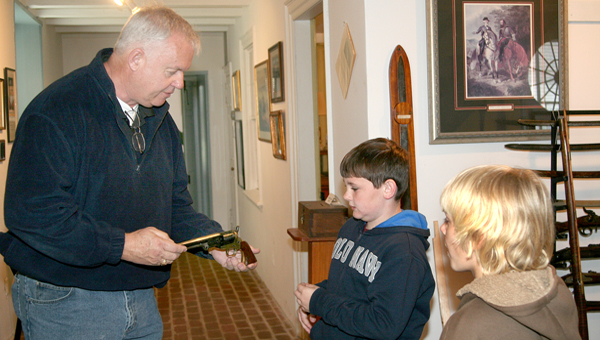 MURFREESBORO — The Civil War, as with any conflict, has countless stories tied to it.

The display of Civil War artifacts is the first event in a series that will be ongoing from this year to 2014.

For nearly a month the Historical Association’s Civil War Committee rearranged the Rea Museum, weaving in Civil War artifacts, most on loan from Joe Minton of Lewiston.

The 150th anniversary is being marked by many states around the country, including North Carolina.

“The Civil War Committee formed to try and tie in our community into what the state is trying to do,” said Carol Lassiter, a committee member. “We’re hoping the community will get more involved with this commemoration.”

In addition to an October 8 and 9 re-enactment of a Confederate and Union skirmish, the committee is also planning other events during the three-year commemoration. They plan to add other artifacts (both Confederate and Union) to the different sites in the historic district.

Already on display are numerous items from the Civil wartime era. Soldier uniforms, a silver bowl hidden in the earth from the invading Union Army, a cannon and other weapons used in the war. One display is dedicated to “The Southern Star”, a ship built in Murfreesboro in the late 1850s. The vessel was the largest ship built in the state and it eventually went on to be used during the Civil War (under the name “The Crusader”) in Union operations.

“When North Carolina broke away from the Union it hurt everybody,” said Steve Fowler, site manager for the Rea Museum.

Murfreesboro, a river port city, was no different. The invasion by the Union at Roanoke Island put river trade in the town at a standstill and with that came a decline in commerce.

The town also had several prominent citizens go to battle for the Confederacy; others sided with the Union.

John Wheeler was the first solider from Hertford County to die in the war. However, Lassiter said, Wheeler didn’t die from a war related injury, rather typhoid fever.

Another interesting notable, Charles Henry Foster, fought for the Union.

“His wife was in Murfreesboro and he was in Norfolk, Va.,” said Lassiter. “He felt like a traitor.”

Slaves and women were also documented in the exhibit. Historian Alice Eley Jones gave a presentation in which she shared three ex-slave narratives from Stagville Plantation in Durham to give visitors an idea of slave life during the Civil War.

One narrative told of a young slave who went to war with his master’s son who was too young to enlist. The two boys were eventually brought back home. Jones noted how this highlighted one of the many roles African-Americans played during the war.

“Gentries had body servants who went to war with them,” said Jones.

She also noted how women were the first to commemorate the war between the states.

“It’s important that we discuss their lives because these were the women who pressed to have Civil War monuments,” she said.

Jones also spoke about Addy Walker, the first black American Girl doll she helped create and whose story takes place from 1864 to 1866.

Along with the displays, re-enactors from the 1st North Carolina Volunteer and 11th North Carolina Troops were also present to give visitors an idea of solider life during the war.

Among them was Minton who has been a collector of Civil War memorabilia and artifacts for most of his life.

“That’s the biggest joy, having it put on display,” he said.

As far as his participation in re-enactments, Minton said he doesn’t like, but rather loves it.

The “Living History” exhibit brought out families, curious about the Civil War and possibly their own ties to the conflict.

Bo McConnell of Suffolk, Va. brought his son, Dalton, 9, to explore the exhibit.

“The history of it initially drew us to it,” he said.

McConnell believes he had family who fought in the Civil War because of war-era guns handed down to him through his family.

For Dalton, the lure was a little more obvious—the idea of seeing and even holding weapons used in the war.

McConnell said he plans to return for October’s re-enactment.

Dennis Babb of Potecasi, who was on hand to sign his book, “Had A Little Fight,” which chronicles the Battle at Boon’s Mill, brought his grandson, Chase Futrell, 7, of Seaboard.

Chase chose to show his interest in the Civil War by donning a soldier’s uniform.

“I’m not really a re-enactor, but I’m trying to be,” he told the Roanoke-Chowan News-Herald.

Babb said it was nice to have the exhibit and garner interest in the Civil War.

“It brings people out, people who may not know their interest in history,” he said.