As the thermometer’s temperature rises, so does the confidence for Head Coach Jackie Copeland’s Bertie High softball team.

Friday, junior Caroline White pitched the second no-hitter of her career as the Lady Falcons blanked the Lady Nighthawks of First Flight, 7-0. 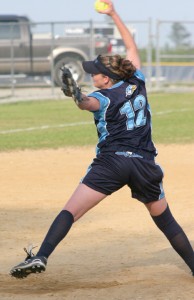 The win raised Bertie’s record to 9-3 and left them 6-1 in the Northeastern Coastal Conference, a game behind Northeastern High School, whom Bertie plays today (Tuesday). First Flight fell to 3-6 and 3-5 in the NCC.

Runs were tough to come by for the Lady Falcons primarily because of First Flight’s defense which kept the normally offensive-savvy Bertie off the scoreboard for all but two innings; two unearned runs, of three, in the first inning and then four more in the sixth.

Along the way, White struck out a dozen batters and only allowed a Nighthawks runner to reach third base once in the contest – and this despite allowing the lead runner on base in four of the seven innings.

“Caroline was just on her game,” said Copeland after the contest. “All her pitches were working today, especially her change-up;  and when something’s working for us we use it until we have to change it.

“It was a team effort,” she added, “but I think they really enjoyed her striking out (their hitters) and just having to sit back and just get the runs.”

The game opened with an easy one-two-three first inning for White before Bertie got on the scoreboard first. Brooke Bowen was hit by a pitch and later scored her team’s first run on a passed-ball.

Whitney Castelloe followed and drew a base-on-balls. She then managed to score from third base when the Nighthawks’ catcher threw the ball away in a failed pick-off attempt.

White helped her on cause later at the plate with a single up the middle followed by Bertie scoring its first earned run of the game on Haley Williams’ double to make it 3-0.

For three of the next five innings, White allowed the lead-off runner to reach base, including once when she hit a batter. Nevertheless, she pitched her way out of trouble and the Nighthawks remained scoreless in the contest.

But Bertie couldn’t mount any offense either as First Flight made several spectacular catches and assists on putouts to keep it at a three-run game.

The Falcons got it going again in the bottom of the sixth inning when they sent six straight batters to the plate and four of them scored.

With the bases loaded thanks to a trio of base-hits, Kelsey White reached on a fielder’s choice and the game’s fourth run came in to score in the form of Williams. Tori Dunlow followed Williams across the plate one batter later when Ashley Harmon delivered an RBI to center-field.

The next batter, Bowen, delivered Brandice Cullipher, who had earlier singled, and that made it 6-0. Bertie’s final run came when Kelsey White scored on Castelloe’s fielder’s choice.

“It’s a big game because it’s a conference win,” said Copeland, “but our bunting needs to improve. When the state playoffs get here, we’ve got to be able to drop one down when we need it.”

After the Northeastern road game, Bertie’s final home game before Spring Break will be Friday when they host Pasquotank.