MURFREESBORO – She’s the type of representative every college hopes for.

She’s a good student, a good athlete and – even better- a good person. 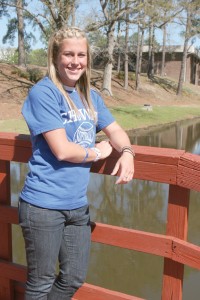 Allie Kolezynski has become synonymous with Chowan University in many ways during her three years at the school. She is a standout softball player, an excellent student and an ambassador for the university.

That took on a new meaning recently when Kolezynski was elected to the NCAA National Division II Student-Athlete Advisory Committee.

“When I was first elected, I didn’t know a lot about it,” Kolezynski said. “I looked into it online and realized what a good opportunity it is for me. I realized that it would entail a lot of work, but it is a great opportunity for the school and the conference on a national level.”

The national Student-Athlete Advisory Committee was formed by the NCAA Convention in March and Kolezynski was selected to represent the Central Intercollegiate Athletic Association.

In part, Kolezynski will be responsible for meeting with student-athletes at Chowan and all other members schools in the CIAA and taking the feedback she gets from the student-athletes to the national committee.

In addition, the SAAC will speak on the behalf of the entire D-II student-athlete body throughout the NCAA governance structure.

Kolezynski said she was excited about her role working with the Student-Athletic Advisory Committees and would work diligently to make sure the CIAA and Chowan had a voice in the national committee.

Kolezynski said she was excited about the opportunity that had been given her thanks to her nomination by Chowan University Deputy Athletics Director Meredith Long.

She said working with student representatives, Athletic Directors and Sports Information Directors from all over the country would open a lot of doors.

“It’s an opportunity not a lot of people get,” she said.

Kolezynski said she is extremely happy to be representing Chowan University, a place she has grown to love since enrolling at the school.

“Chowan has allowed me the opportunity to grow as a  person and a leader,” she said. “Everyone in the athletic department wants students to do well and will do anything to see that happen. I think that’s true of the community too.”

Kolezynski said she was able to do all the things she wanted at Chowan – get an education, play softball and participate in community service.

“I only have four years and I’ve got to make the most of it,” she said.

Long said she nominated Kolezynski for the post because of her positive influence, ability to maintain the pressures of a student-athlete and ability to follow through.

“Allie embodies everything a Division II student-athlete should be,” Long said. “She is level-headed and a go-getter. She also understands that she is a student first and an athlete second.

“To be 21 years old, she has the best follow-through of anyone I’ve been involved with at Chowan,” Long added. “If she tells you she is going to do something, she does it and does it with gusto.”

A Business Administration major, Kolezynski was one of the first recruits of Chowan Head Softball Coach Mandi Balduf. The coach said she was happy that Kolezynski had come to Murfreesboro.

“She is a well-rounded person,” Balduf said. “For her to receive this honor shows the kind of person she is. She is a sincere person and she really cares about Chowan.

“Allie K is a great representative of the school and of the CIAA,” Balduf added. “I’m honored to have her in the program and to have been one of my first recruits. She has an amazing future ahead of her and this opportunity will open some doors for that future.”

As much as Kolezynski is proud of her school, she has also  grown to love the town of Murfreesboro and Hertford County.

“The people here are so good to you,” she said. “When they see you on the street, they ask how the team is doing and they are so supportive. There have been many times when someone has clipped an article from the newspaper and put it in my box and I may not have even known them.

“It’s a great place to be,” she added. “I’m thankful for the community support I feel at Chowan.

DII SAAC members serve as student-athlete liaisons between the happenings on campus, conference and national levels. Members are selected by the Division II SAAC Nominating Sub-Committee from a diverse pool of candidates submitted by the conference office. The Division II Management Council ratify the appointment and each student-athlete serves a non-renewable 3-year term; however the student-athlete may only serve up to one year after exhausting their eligibility.