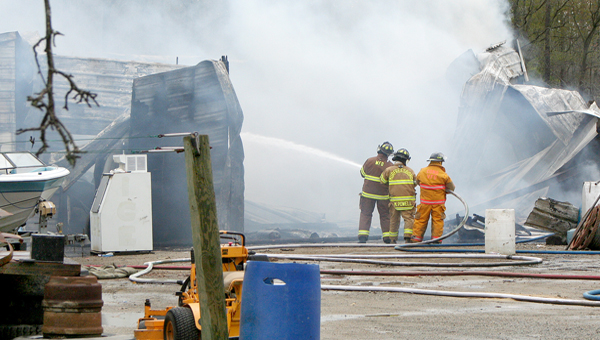 Firefighters from Murfreesboro, Como and Winton combined their efforts to bring a Tuesday morning blaze under control at Brown’s Trucking Company, located on US 258 just north of Murfreesboro. Staff Photo by Amanda VanDerBroek

MURFREESBORO — A fire has destroyed a shop that housed trucking company near here.

On Tuesday morning, three fire departments responded to the blaze at Andrew Brown’s Trucking Company behind a residence located at 312 Highway 258, just north of Murfreesboro.

According to Murfreesboro Fire Chief Bryant Cooke, when the first crews arrived the structure was already fully engulfed.

In addition to the flames, firefighters battled high winds and exploding acetylene tanks.

Cooke said three such tanks ruptured in the fire, one exploded into the air approximately 75 to 100 feet and landed in the yard. For safety reasons, fire crews released the owners’ dogs from their pens that were located close to the burning shop.

Cooke said it took firefighters approximately one hour to get the fire under control. There were no injuries reported and the cause is still under investigation. He said the building is a total loss.

The owner of the trucking company, Andrew Brown, said he was notified about the fire by his son while he was in Conway. The building was used to service Brown’s trucks.

“I did everything in that shop,” he said.

Brown said he had no idea what could have caused the fire because nothing had been left on and there had been no recent welding inside.

Cooke thanked Como and Winton fire departments for their assistance.